Exhibition of Fine Art at the Institute 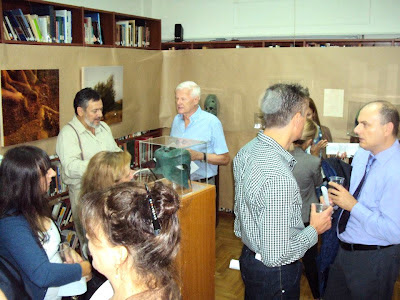 In the past few years the Institute has widened its program of offerings to reflect our broader mission and to serve as a bastion of events that both display the richness of Canadian culture and the strength of Canadian/Greek relations. This past week the Library of the Institute was transformed into an art gallery for the display of work by five artists in a variety of media. The exhibition was held under the umbrella of a newly-formed group in Athens called “The Friends of Canada” (www.friendsofcanada.gr/) with the well-known Canadian writer, Kathryn Lukey-Coutsocostas as the guiding light. The works were on display from Tuesday through today.

The title of the group exhibition was, “Reflections: Canada in Greece / Greece in Canada” Stephanie Sampson, one of the five artists, curated the show. The other participants were Terry Billings, Ana Kapodistria, Magda Roussi, and George Roussis. Media included photography, metal, watercolour and papier-mâché. Themes ranged from street portraits and real and altered landscapes to ancient theatrical masks and bronze sculpture. There was an enthusiastic and diverse crowd at the opening on Tuesday night. Ambassador Robert Peck and his wife Maria Pantazi-Peck were there to support the effort. The exhibition is one of the ways in which the Embassy is celebrating the 70th anniversary of the initiation of formal diplomatic relations between Canada and Greece. I am told there are more events to follow!

Jonathan and I look forward to other artistic endeavours, especially Canadian flavoured ones, taking place at the Institute this year!!!

Cordially,
David Rupp
Director
Posted by CIG-ICG at 10:27 AM