Each year the British School at Athens publishes its Archaeological Reports. The main report item is always “Archaeology in Greece” authored by the Director of the BSA and other collaborators in Greece. As of 2009 it has a “sister publication”, AGOnline (http://chronique.efa.gr) under the general editorship of the Director of the Ecole française d’Athènes.

Three of the Institute’s field projects are covered in the current article for 2009-2010. The synergasia at Kastro Kallithea in Thessaly, directed by M. Haagsma (University of Alberta) and S. Karapanou (15th EPCA), is reported on (p. 107). The work of another synergasia at Argilos in Central Macedonia, directed by J. Perreault (Université de Montréal) and Z. Bonias (48th EPCA), is covered (p. 141). Finally, I Begg’s (Trent University) Leukos Survey Project on Karpathos is mentioned too (p. 169, fig. 180). You can learn much more about each project from our website. 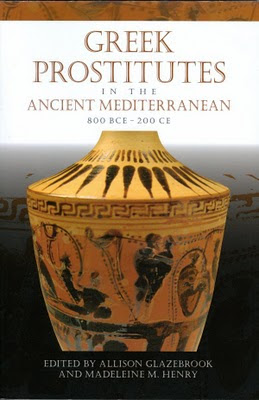 Book of the Blog
The nature and variation of the prostitution in the ancient Greek world has fascinated scholars since at least the publication of Hans Lichts’ Sexual Life of Ancient Athens in 1932. Feministic and gender studies of the past twenty five years have taken new approaches to investigating this perennial social institution. Recently the use of artistic depictions, artifacts, sculptural works and architectural remains have augmented the known textural sources to elucidate the topic further. Despite the concentrated efforts of many researchers from many perspectives numerous questions remain unanswered. Some of these include, according to Thomas A. McGinn (Vanderbilt University): What were the origins of Greek prostitution? What distinguished a pornē from a hetaira? Was prostitution totally exploitative or somewhat autonomous? Were prostitutes marginalized in society? How can brothels (porneia) be identified? Were there other venues for venal sex?

A panel discussion held at the 2007 APA/AIA meeting in San Diego attempted to address these questions and others. The organizers, Allison Glazebrook (Brock University) and Madeline M. Henry (Iowa State University) have published the nine papers plus an Introduction and a Conclusion in the volume, Greek Prostitutes in the Ancient Mediterranean, 800 BCE – 200 CE (Wisconsin Studies in Classics, University of Wisconsin Press, 2011). Over half of the contributions deal with the extensive and varied, but nevertheless ambiguous, evidence from Archaic through early Hellenistic period Athens. The literary evidence for prostitution in the Geometric and Archaic periods characterizes it as the traffic of women first in war and then in commerce. Brothels in Hellenistic Delos, Republican literary tropes relating to prostitution, the roles of prostitutes and pimps in Late Republican political conspiracies and the Greek technical and colloquial terminology for female and male prostitutes, procurers, and brothels complete the volume. The myriad of references cited provide an excellent springboard for more research. Individually and collectively the contributions and the volume offer many stimulating and thought provoking insights into the complexity and the variability of prostitution in the Hellenic world.

Professor Glazebrook deserves high praise for donating the volume to the Institute’s Library. The Library seeks to serve as the repository of the publications of Canadian scholarship relating to any aspect of Greece’s rich cultural heritage – past and present.

Cordially,
David Rupp
Director
Posted by CIG-ICG at 11:45 AM