The Institute reopened last Thursday after our annual summer recess. Jonathan divided the period between Kos, Turkey and the UK. I sojourned in Crete and travelled to Copenhagen. We are now in the process of organizing the Institute’s Fall and Winter/Spring lecture programs as well as the events for our Friends’ Association. As always these will be diverse and interesting. We hope to see you at them!

We wish to welcome to CIG two individuals. The Institute’s first Neda and Franz Leipen Fellow, Christopher (Chris) Wallace, is a Ph.D. candidate in the Collaborative Program in Ancient History at the University of Toronto. During the year he aims to complete his doctoral dissertation entitled, “The Evolution of the Hellenistic Polis”. This is a nuanced “cultural” history of the Greek city-state during the Hellenistic period which focuses on several key civic institutions and practices, looking at how they evolved in different cities under differing circumstances, how they were imagined, and how they were deployed in service of the community. Chris is no stranger to Athens, as he participated in 2008 on the American School of Classical Studies at Athens’ Summer Session program. His work for the Institute will be in the Institute's Library and Archives.

Another first for CIG is the new Wilfrid Laurier University Internship. Haley MacEachern will be the first person to hold this position, for three months this fall. Haley is a major in Near Eastern and Classical Archaeology at WLU. In 2008 she participated in the Institute’s survey in eastern Boeotia, and in 2009 in our excavation at Kastro Kallithea in Thessaly. She will be working in the Library.

You will be able to meet both of them at our first lecture in October. 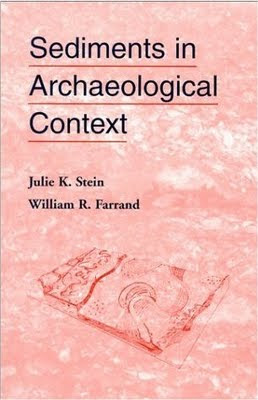 Book of the Blog
As you can see, this feature of my blog is back. For the next ten months I will be offering you out there in cyberspace mini-reviews of selected books, monographs and edited volumes that are recent acquisitions to our Library. The focus of these reviews are items that highlight the specializations of the Library. In brief, they are, archaeological theory, method and practice, survey archaeology, environmental archaeology, geoarchaeology, ecofactual studies, site and artifact conservation, computer applications in archaeology, cultural/heritage management and Boeotian studies. We invite you to visit our Library and peruse the holdings in these areas. We will be adding new titles during the year.

In archaeological research, knowing the “context” of an artifact or an assemblage is the sine qua non for its accurate dating and plausible interpretation. Thus, objects found in situ have a primacy over those lacking a specific provenience. However, to know an artifact’s depositional context, to understand the physical and chemical characteristics of this sedimentary matrix and how it was formed are other matters altogether.

Sedimentary matrices are more than simply the “dirt” or “soil” at an archaeological site. Formal sedimentary analysis allows one to describe and to analyze systematically the matrix particles that encase the artifacts and ecofacts. This specialized branch of sedimentology is introduced and surveyed in the book edited by Julia K. Stein and William R. Farrands, entitled Sediments in Archaeological Contexts (Salt Lake City, UT, 2001). The seven contributors discuss sediments encountered by archaeologists in seven different types of environments. The four contributions that focus on cultural environments (J.K. Stein), rock shelters and caves (W.R. Farrand), dry alluvial environments (G. Huckleberry) and coastal environments (L.E. Wells) are the most germane to the Mediterranean reality. As the depositional environment shapes the sediments (natural and anthropogenic) that make up the archaeological matrix it is critical for archaeologists to understand the formational and depositional processes involved. The preservation of the artifacts and the ecofacts are also affected by these processes and the makeup of the matrix. Each contribution is well-illustrated with charts, graphs, tables, plans and b/w photographs. The references cited form a clear pathway to more detailed studies and related topics.

This thin book, and others dealing with geoarchaeology and environmental archaeology in the Institute’s Library, forms an excellent starting point for the education and the research activities of field archaeologists.