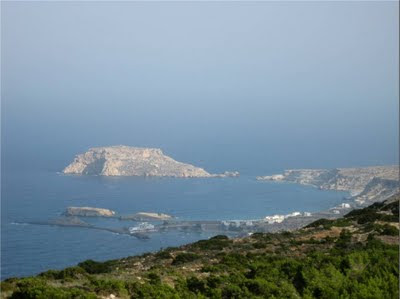 While I was researching the papers of the late Prof Gilbert Bagnani, now in the archives of Trent University and the Art Gallery of Ontario, I discovered his unpublished account of an excursion he and his fellow students at the Italian School of Archaeology in Athens took around the island of Karpathos in June 1923. For three weeks they traveled around the road-less island by ship and by donkey. Their main excavation was a magnificent mosaic floor laid over another mosaic floor belonging to two superimposed paleo-Christian basilicas at Arkasa. But it was Gilbert’s description of the extensive finds around Leukos and the offshore islet of Sokastro that drew my attention to this site. The many enormous rock quarries, an underground pillared cistern, and pedimental blocks possibly from a temple led him to identify the site with ancient Nisyros, which Strabo wrote was on Karpathos but which had never been located archaeologically. The beaches sheltered from the prevailing north winds by Sokastro form the biggest such harbour on the west coast of Karpathos, a major sailing route throughout the ages. My own research tentatively suggests that its name on medieval maps was “Fianti” and Sokastro was called “Zorzadori,” both yet to be explained. 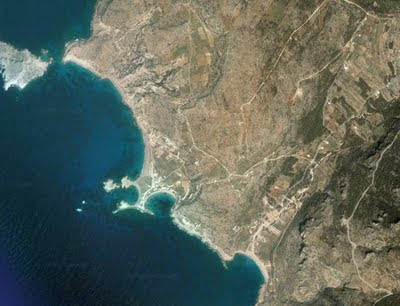 After I rediscovered the various sites he described around Karpathos, I asked Dr Michael Nelson, now of Queen’s College New York, if he would be willing to conduct a survey of the site at Leukos, and he suggested that I invite Dr Todd Brenningmeyer of Maryvale College in St. Louis to join us. The staff of the Ephorate of Byzantine Antiquities in Rhodes could not have been kinder to our research proposal, and in 2009 the Canadian Institute received formal approval from the Hellenic Ministry of Culture to begin a survey. (The first ever permit to a foreign institution to conduct archaeological work in the Dodecanese islands.) Michael as Field Director was responsible for architecture, and Todd for the geophysical survey. Dr Amanda Kelly of the National University of Ireland, Galway agreed to look after the ceramics. The survey also benefitted greatly from the various rescue digs at Leukos conducted by the Greek Archaeological Service at Kato Leukos, whose data they have shared with us. 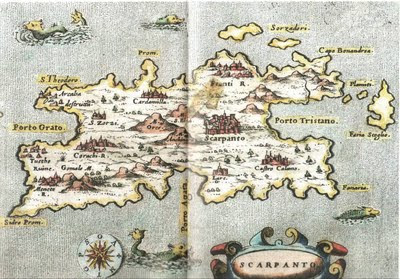 The survey results are still preliminary, of course, pending a study season. In brief, the beaches at Kato Leukos once served as harbours in the Early Byzantine period, with evidence for a seaside bathing establishment as well as small scale industrial activities. There were at least two paleo-Christian basilicas, one now along the water-line because of local subsidence of the land. On top of the offshore islet of Sokastro, a fortification wall protected an elaborate complex of many barrel-vaulted cisterns and at least one church; the date for construction is not yet ascertained but the sherd cover dates to the 11th, mostly 12th, and 13th centuries. It will take some time to analyze the field data, including over 2,000 aerial images of Sokastro alone. 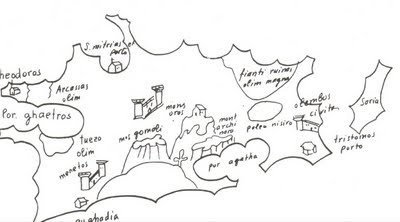 After a final study season, the future of Canadian research activity at Leukos is not certain, although not for any lack of potential. Years ago the Greek Service had the foresight to acquire a large tract of land along the shore to protect it from development and so it shelters an undisturbed Early Byzantine harbour town. In contrast to ancient written sources, there is recent and accumulating archaeological evidence throughout the Dodecanese for widespread prosperity in the Late Antique/Early Byzantine period, primarily dozens of paleo-Christian basilicas, and Kato Leukos offers a window into the secular and naval life on which that prosperity was based; we do know that around 410 a Karpathian fleet regularly brought grain from Alexandria to Constantinople. At least a few of the structures clearly extend down into the water because of local subsidence, and so a synergasia with the Ephorate of Underwater Antiquities would also be informative to complete the picture. Incidentally, the region is right on the edge of seismic activity caught between the Anatolian and African plates which are pushing up the Aegean sea bed as well as an active volcanic arc, and deserves serious geological analysis as well. Finally, the uniquely preserved complex of cisterns on top of Sokastro may well exemplify a naval base where ships of someone’s fleet could be resupplied with water, etc., and so determining who built it and when would have obvious ramifications for our meager knowledge of the naval history of the Aegean in the Middle Byzantine period, when Crusaders from the West were encountering Arabs from the East. 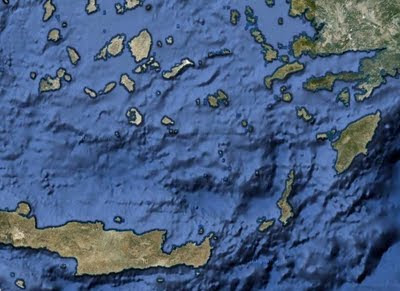 There are many people to thank for their support of this survey. At the Rhodian Ephoreia, Drs Maria Michaeilidou, Eleni Papavassileiou, Angeliki Katsioti, and Vassili Karabatsos have been very helpful in many ways. My international colleagues Drs Nelson, Brenningmeyer and Kelly, are grateful to their respective institutions for funding, as am I to the Bagnani Trustees. The students (Stacey Larson and Bethany Nobbe from Maryvale College in 2010, Eoin O’Conor in 2010 and 2011 and Dylan Stuart in 2011, both from Ireland) have all worked cheerfully and unstintingly while learning much about surveying and life on the project. Finally, our hosts, the people of Leukos themselves, have been most warm and welcoming. It would be a fitting tribute to everyone’s faith in the project if future research based on their help both in the field and in archives were able to provide the ancient and medieval names for such an important harbour, as first suggested by Gilbert Bagnani nearly a century ago.

Ian Begg
Trent University
Posted by CIG-ICG at 11:11 AM