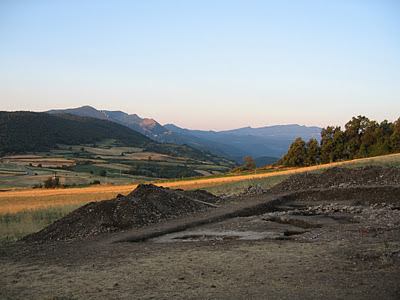 This coming Wednesday, the 19th, at 7:30 pm, is the first Institute lecture for the 2011/12 season. The speaker will be Dr China P. Shelton (Lecturer, Department of Sociology, Framingham State University) who this fall is doing research at the Wiener Laboratory of the American School of Classical Studies at Athens. The title of her lecture is, "A Holistic Approach to Environmental Archaeology: Plants, People, and Landscape in the Italic Iron Age".

Dr Shelton’s lecture will focus on Environmental Archaeology as a category of study that helps to put people in context - but needs itself to be contextualized using input from other disciplines. We do not simply use science to reconstruct the environment and subsistence practices as ends in and of themselves. Rather, we also want to know what people in the past thought about different environments, and how they used those environments to define themselves and others. In order to reach these more intangible aspects of the human experience, it is necessary to take a multidisciplinary approach, incorporating ideas and information from Anthropology and Classics to flesh out the archaeological data. She will present one example of this kind of approach, drawn from recent paleoethnobotanical research in the Sangro River Valley, Abruzzo, Italy, which investigated consumption practices and environment as a potential basis for identity construction during the Iron Age (6th - 5th centuries BC). 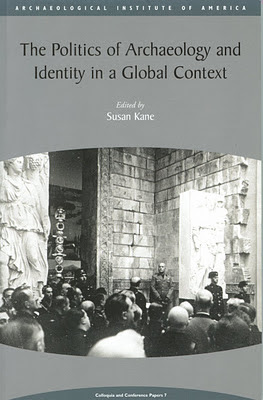 Book of the Blog
Gone are the simpler, more innocent days of the “archaeology” of some particular part of the past. One now talks of the “archaeologies” of a particular culture. Even in taking this approach, that is that there is no “privileged” interpretation, but the possibility of many views of the past, the terrain in frequently contested, with competing claims to priority and authority. All points of the intellectual, political, social and cultural compasses are represented in these fierce debates. The globalized, post-modern world we live in is a warm and moist greenhouse for such developments. With the addition of nationalism to this potent brew, the objectives and practice of archaeological research as well as the use and interpretation of ancient monuments and archaeological discoveries, this contemporary discourse is no longer the protected preserve of the Western elites.

Kane’s Introduction explores succinctly the background and trends in how archaeology, politics and identity are contested, by whom and for what purposes in contemporary societies across the global. The central role of archaeology in creating and shaping culture history lends itself to manipulation and polyvalency by the owners and the consumers of the past, the archaeologists themselves, the local and national communities where this research take place and the global community of consumers.

The collection of papers spans interwar Italy and Albania (O. Gilkes), 20th century Central (R.A. Joyce) and 19th-20th century North America (F.P. McManamon), 19th-20th century Egypt (L. Meskell), 19th- 20th century Greece (Y. Hamilakis), Late Hellenistic Palestine (S. Herbert), 19th-20th century Japan (W. Edwards) and 20th century Turkey (I. Hodder). Conflicting political and intellectual agendas and/or the construction of cultural identity in the face of real or perceived external threats permeate these fascinating discussions. This can involve not simply the question of “Who owns the past?” but also of “What constitutes the archaeological record?” The fabrication of culture history from consciously chosen subsets of the archaeological record to support an a priori nationalistic agenda as well as to craft a cultural identity with the requisite patina and pedigree of a glorious but fictive past occurs as well.

The contributions to the volume each in their own way prod archaeologists and fellow travellers to think hard on how they relate as researchers to the contemporary world and to the political and social systems in which they work. The growing demand for cultural pluralism, multivocality, shared use and ownership as well as non-colonialist attitudes and practices is forcing archaeologists to negotiate with the local and the national communities they work in for a balanced custodianship and vision of the past. Who ever said doing archaeology was easy?

In closing, the paper by Yannis Hamilakis is a short prequel to the lengthier and broader discussion that finally appeared after being rehearsed in earlier publications as The Nation and Its Ruins. Antiquity, Archaeology and National Imagination in Greece (Oxford: Oxford University Press, 2007). This too is in our Library. Come and delve into the ever changing ways of constructing cultural identities using the archaeological record.

Cordially,
David Rupp
Director
Posted by CIG-ICG at 11:54 AM