Middle Ground in Christian Art of the Medieval Near East, Don’t Risk Missing Out! and Greek Monuments Are Gaining Voices


The final lecture of the Institute’s Winter/Spring Program will occur on Wednesday, March 28th at 7:30 PM. We are pleased to welcome back to the lectern Professor Glenn A. Peers (Department of Art and Art History, University of Texas at Austin). He publishes on the theoretical aspects of Byzantine art, on frames and framing in Byzantine art as well as on theological and hagiographical problems. One of his current research interests is Christian-Muslim interaction in the Middle East. His lecture, “Finding Middle Ground in the Christian Art of the Medieval Near East”, will delve into the complexities of art in this region during this seminal period. We will be treated to another excellent lecture I am certain!

Don’t Risk Missing Out!
The 31st of March is fast approaching and you are in grave danger of missing out! Why risk the unending embarrassment of not buying the book (or three) that your archaeological library lacks before the sale ends? It is so simple; it is so easy. All you have to do is go to http://www.cig-icg.gr/?cat=2&item=4&lang=en. and make your bid. Why resist further? 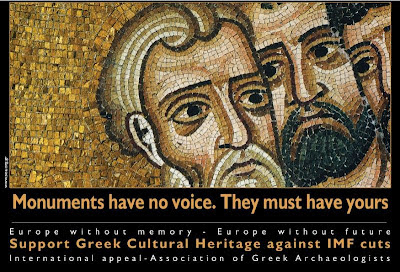 “Monuments have no voice. They must have yours” Campaign Gains Voices
Each week the news from the Hellenic Parliament gets worse on the proposed plans and the bills that are voted on which deal with the Ministry of Culture and Tourism’s obligations and abilities to fulfill its sacred stewardship mission for Greece’s cultural heritage in all its forms. As I reported on last week The Association of Greek Archaeologists has started a campaign, “Monuments have no voice. They must have yours” to combat these IMF-caused cuts and to galvanize worldwide support to convince the Papademos Government that this is the wrong path to follow if it is seeking truly sustainable economic development and growth. If cultural heritage, especially archaeological sites and museums, is one of the prime attractors that drives Greek tourism, then to gut the Hellenic Archaeological Service is economically counterproductive to say the least. Their Facebook page has become a rallying point for expressing concern and for giving active support: http://www.facebook.com/AssociationOfGreekArchaeologistsAgainstImfCuts.

You can get many of the details of what is happening here in Greece as well as what is in the pipeline from this source. As you will see there is active support from our colleagues in the UK and the United States. So far, Canadian archaeologists, epigraphers, philologists, historians and art historians who do research in Greece and interact with the Hellenic Archaeological Service are silent. Why??? Why haven’t my colleagues in Canada written to the Minister of Culture and Tourism, Mr. Pavlos Geroulanos, to express their professional opinion on the current developments in this central feature of Greek society? What is happening here and now is a radical change in the paradigm for the protection, the preservation and the study of Greece’s expansive cultural heritage. As they say here, «Ξυπνα, Ρε!!!»