Belated News! Three Strong Earthquakes Struck Crete in the Interwar Period; What Are the Archaeologically-Oriented Events in Athens?


Unknown today to most archaeologists and historians were the three severe earthquakes that struck Herakleio in Crete in 1926, 1930 and 1935. The very strong one in 1926 was noted by Sir Arthur Evans in his monumental work The Palace of Minos. It stimulated him to think about the role of earthquakes in the destruction of the Minoan palaces.

In this interwar period the Ephors of the antiquities of Crete and Directors of the Museum in Herakleio, Stephanos Xanthoudidis, until his death in 1928, and afterwards Spyrdon Marinatos, had to deal with the damage done to the Museum and its collections.

Giorgos Tzorakis, an archaeologist at the Archaeological Museum of Herakleio, will describe the challenges that these two men faced in their positions in his lecture in Greek on Monday, May 26th at 18:30 at the Historical Archive of the Hellenic Archaeological Service at Psaromylingou 22 on the cusp between the Kerameikos and Psyrri districts of our diverse city. The lecture entitled, "’Τα αρχαία μας ευρίσκονται εν κινδύνω...’ Οι μεγάλοι σεισμοί του Μεσοπολέμου που έπληξαν το Ηράκλειο και το Μουσείο του, κατά τα έτη 1926, 1930 και 1935”, is the last lecture of the 2013/2014 Lecture Program of the Syllogos Filon tou Istorikou Archeiou tis Archaiologikis Yperesias.

Tzorakis’ research in the Historical Archive of the Hellenic Archaeological Service and in the papers of the two protagonists has revealed their titanic struggle to repair the damage and prevent further damage. All this happened in a consistently unfavorable environment created by the economic difficulties of the Ministry and the country as a whole caused by the influx of refugees from Asia Minor and the world-wide Great Depression. Xanthoudidis’ and Marinatos’ strong personalities played a role in how each coped with the situations that they faced. 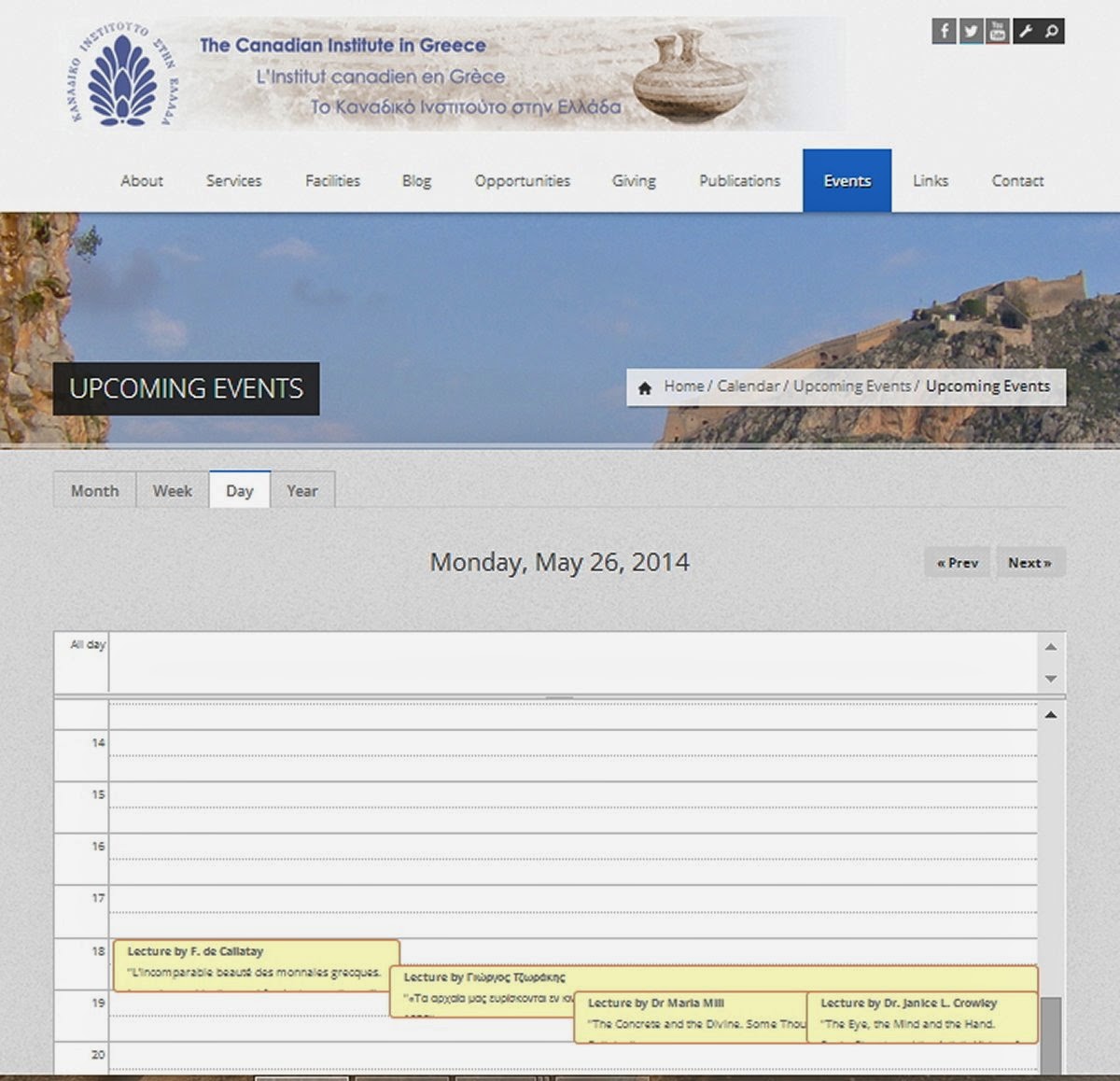 CIG Calendar of Events
Speaking of upcoming lectures in Athens, why don’t you let our “Calendar of Events” (dropdown from “Events” on upper Menu Bar) on the newly-revamped CIG website (www.cig-icg.gr) be your one stop place to learn what are the scheduled archaeologically-oriented lectures, open meetings, colloquia, conferences, seminars, etc. that are going to happen in Athens each month besides the what CIG offers??? As you can see, even in May the calendar is has many events to tempt a wide variety of archaeological and historical interests. Jonathan combs the announcements that we receive each week and religiously enters the new events on the calendar along with the links to specific programs. Over time this Calendar of Events will become an archive of what has happened in the past. As many of the listed events are now live-streamed, and some are available afterwards on the websites of the organizations and/or on their YouTube Channel (such that of the CIG), you don’t even have to be in Athens to watch them!

Cordially,
David Rupp
Director
Posted by CIG-ICG at 11:32 AM