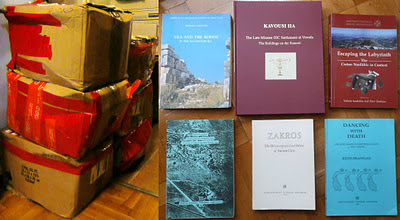 The generosity of the Institute’s friends continues, I am proud to report! This morning we received six large boxes of books which are donations to our Library by Beryl L. Anderson. A former librarian from Ottawa, over the years she has been a regular donor of books to the Library. Beryl is a published author herself, writing on plant dyeing, hand spinning and weaving of wool.

The several hundred books focus on Aegean Prehistory (especially Crete), Classical Archaeology and Greek History, and include also site guides and reference works. Slowly but surely we are filling in the gaps in our Library and expanding its coverage. Who will be the next individual to donate their personal library to the Institute??? 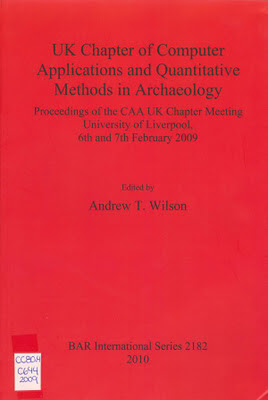 Book of the Blog
It is difficult to keep up with the ongoing research, the new applications and innovative ideas associated with the ever expanding use of digital technologies and software in the cloud or resident on ever faster and ever lighter laptops. One needs to be very imaginative to discern if any of this can assist you in your fieldwork, analyses, reconstructions and interpretations.

One way to keep abreast of these developments is to read the succinct case studies that are published in the proceedings of workshops, colloquia, meetings and conferences that are devoted to computer applications in archaeology. One such volume is UK Chapter of Computer Applications and Quantitative Methods in Archaeology. Proceedings of the CAA UK Chapter Meeting, University of Liverpool, 6th and 7th February 2009 (BAR International Series 2182, Oxford, 2010) edited by Andrew T. Wilson. The nine contributions run the gamut of what our colleagues are doing at the moment in this vast realm.

The ambitious project to put the online the British Museum’s Collections is presented along with its inherent limitations, many challenges and potential users. The importance of tagging properly digital imagery with metadata is stressed in another contribution. The possibilities of podcasting in archaeological research and communication are outlined. Various methods for modeling the past are presented in two papers. One is focused on subsistence strategies in the EB southern Levant. The other deals with the reconstruction of the interior spaces of PPN houses in the Near East. The spatial distribution of anthropogenic materials deposited inside Scottish longhouses of different periods is compared against a periodized “Cognitive Model” using an application of relativity in GIS. Spatial theory in archaeology can be taught by utilizing the 3-D multi-user virtual environment of “Second Life”. Konstantinos Papadopoulos explores the possibilities of visualizing the interior illumination of Minoan tholos tombs in the Phourni cemetery with natural and artificial light. Lucy Goodison has investigated this issue from the perspective of natural light at specific times of the year. And finally, there is Canadian Content as well!!! Nicolas Beaudry (Université du Québec à Rimouski) and Ulla Rajala on the Canadian Archaeological Project at Ras el Bassit in Syria went from a digital topographic survey of an Early Byzantine basilica, to the partial excavation of the church, to the creation of a 2-D plan of it, to the construction of a 3-D model visualizing the existing remains of the superstructure.

There are many archaeological projects in Greece, not to mention the Ministry of Culture and Tourism’s efforts for Europeana, which could adopt some of these approaches to their research with positive effect. The references cited in the contributions are doorways to more detailed explanations of the approaches used. The Institute’s Library has other volumes like this with case studies such as these which can stimulate and inspire an archaeologist. Shouldn’t more Greek projects be represented in future volumes?

Cordially,
David Rupp
Director
Posted by CIG-ICG at 11:19 AM