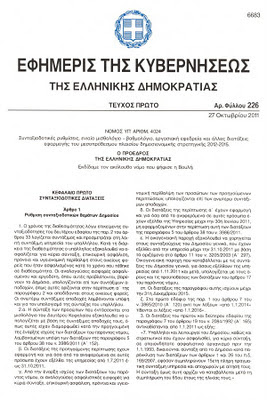 For the past two years Greece has been enduring the ever worsening effects of the “Economic Crisis”. The desperate need of the government to reduce the size and the cost of its operations in order to reduce its huge annual deficits affects every aspect of Greek life. All manner of taxes are rising, especially related to property and consumption items. The drastic reduction in consumer spending due to less liquidity and general pessimism has driven the high rate of small and medium business closures and fast rising unemployment. For example the mini-market across the street from the Institute closed in September.

In this rush to create a more manageable, less costly and ultimately sustainable state there has been significant collateral damage to core institutions, such as IGME (Greek Institute of Geology and Mineral Exploration) and ERT (Hellenic Broadcasting Corporation). A law passed on October 27th – 4024/2011 – by the Papandreou government said that 30,000 older public servants with many years of service would either be forced immediately into unpaid pre-retirement or placed on “labor reserve” on reduced salary for two years before automatic pre-retirement.

Given the demographics of the Greek Archaeological Service and its pattern of irregular intake of archaeologists for permanent positions this law has hit it very hard. For many of our Greek colleagues I am disappointed to say, today, November 25th, is their last day of employment whether they were qualified for normal retirement or not. Our loyal collaborators Vasilios Arvantinos of the 9th Ephorate of Prehistoric and Classical Antiquities, Zisis Bonias of the 37th Ephorate, and Olga Philanioutou of the 20th Ephorate are included in this most unfortunate and abrupt loss of talent and experience. My wife, Metaxia Tsipopoulou, Director of the National Archive of Monuments, joins them too, alas. As this law will engulf more employees next year, other members of the Service have taken premature retirement this fall. Thus, on Monday the Service will be a shell of its former self. The Greek public and media are mostly unaware of this development.

It is clear that the departure of so many senior archaeologists will allow the government to downsize further and to re-organize radically the Service. In 2012 we will learn how the Greek state plans in this new reality to fulfill its vital mission and to meet its obligations as the steward of the rich and diverse cultural heritages of this country.

In closing, on behalf of the Institute, its staff and its members I wish to extend to our Greek colleagues who are setting out tomorrow on a new path in their lives our deepest appreciation for their invaluable assistance in our research over the years and for the firm friendships forged. You are always welcome to use the Institute and its Library. We look forward to your participation in our lecture series to present the results of your research. 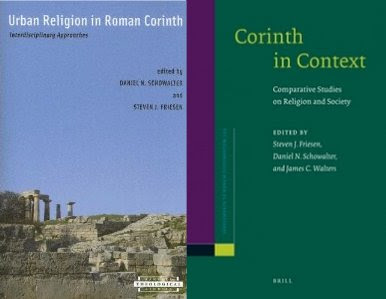 Books of the Blog
The Institute’s Library is growing from purchases, exchanges and donations. Among our many loyal supporters with regular financial contributions and donations of books are Mary and Michael Walbank. Recently they enriched our holdings with two volumes dealing with religion and society in Ancient Corinth from the Late Hellenistic through Early Byzantine eras.

The first volume, Urban Religion in Roman Corinth. Interdisciplinary Approaches (Harvard Theological Studies 53, Cambridge, MA, 2005) is edited by D.N. Schowalter and S.J. Friesen. Using a plethora of sources – archaeological and architectural remains, funerary assemblages, art, inscriptions, literary texts and apostolic letters – the 16 contributors plumb the depths of the polytheistic and Christian religions of Corinth across seven centuries. The broader urban and regional context of this religious observance is surveyed first by G. Sanders and D. Romano. Mary Walbank’s contribution examines the grave goods and practices from cemetery to the north of the city where ordinary people were buried from the early colony through the 6th century CE. The references cited in the volume cover almost 40 pages! The maps, plans, drawings and images supply sufficient visual documentation to support the various lines of argument and the many comparisons.

The second, again with Friesen and Schowalter as editors along with J.C. Walters is entitled, Corinth in Context. Comparative Studies on Religion and Society (Supplements to Novum Testamentum 134, Leiden, 2010). This collection of contributions takes a broader perspective, both in the timeframe, the geographic scope and the thematic issues. There is more emphasis on the period before the establishment of the Roman colony, on the polytheistic religions, and the Corinthia as a whole as revealed by pedestrian survey. Six of the 13 authors participated in the previously mentioned volume. Mary Walbank presents the coinage of Roman Corinth from an iconographic perspective. She discusses the depiction of religious monuments and buildings as well as statuary in the city and the Sanctuary of Poseidon. Michael Walbank , using grave inscriptions dating from the 4th through 7th centuries CE, identifies 390 names and 107 occupations from a prosperous subset of Christian Corinth. Again there is an extensive up-to-date bibliography and numerous useful illustrations. The two volumes taken together form the starting point for many discussions not just on the religious life and practices of the city spanning over 800 years but also on the character of the society in the urban core and in its rural hinterland.

Cordially,
David Rupp
Director
Posted by CIG-ICG at 11:49 AM