An Art Exhibition Opening plus the new Canadian Ambassador in Person and G.I.S.ing Boeotian Landscapes


This coming Wednesday evening starting at 7:30 pm, our annual event for the Athens Association of Friends of CIG to start the holiday season has evolved into something very special. Our hardworking volunteer, Chris Stewart, is an artist and a photographer in his real day job. For our event he has mounted in the Library an exhibition of his work entitled, “Senses”. To open the exhibition he will speak on his artistic vision.

Not stopping at that, the new Ambassador of Canada to the Hellenic Republic, Robert Peck, will be present to meet fellow Canadians and to listen to your ideas on how he can work to improve Hellenic-Canadian relations, both here in Greece and back in the True White North!

With all of these exciting extras, do not fear that the traditional elements of this gathering will be forgotten! Yes, Virginia, Jonathan’s mulled wine and ample amounts of kourambiedes and melomakarona will be there too. So please join us for good companionship and cheer, to put aside for a moment the bleak financial situation that has engulfed us. 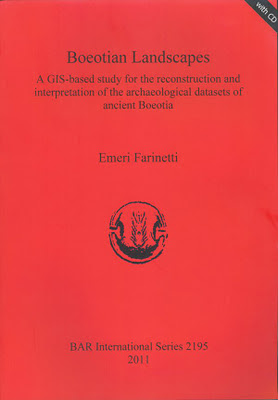 Book of the Blog
With John Fossey’s generous donation of books and monographs to the Library earlier this year, many of them related to his long-standing research interests in Boeotia, we added Boeotian Studies as one of the areas of specialization for the Library. To augment that collection, one of our most recent purchases focuses not simply on Boeotia but also on GIS-based analyses, another one of the Library’s specialties.

The volume in question is by Emeri Farinetti and it is entitled, Boeotian Landscapes. A GIS-based study for the reconstruction and interpretation of the archaeological datasets of ancient Boeotia (BAR International Series 2195, Oxford, 2011). Dr. Farinetti has turned her doctoral dissertation for the University of Leiden, under the supervision of Prof. John Bintliff, into a stimulating exploration of how GIS can serve both as a platform for storing and organizing geographical based datasets and the analysis, reconstruction and interpretation of them. For those not familiar with the purpose, the potential and the power of using GIS to examine settlement patterns and resource exploitation at the regional level Chapter I and Concluding Remarks is an excellent way to start. Chapter II.1-2 presents succinctly the physical landscape of Boeotia and the state of archaeological research there. It should be added here that this region has been surveyed in the past twenty years by a number of sophisticated pedestrian surveys, including CIG’s Eastern Boeotia Archaeological Project. Using the concept of chora or the territory of an ancient polis the remainder of the chapter is divided into 14 separate sub-regions, most corresponding to ancient poleis. The topographical setting, boundaries, physical land units, resources and the archaeological record of each are summarized with ample maps, tables and graphs. Of particular interest is the relationship of known archaeological and historical sites to the modern road network as a discovery factor. She then proceeds to analyzing these datasets in terms of settlements, burial areas, cult places/religious areas, forts and fortifications and other unspecified activities. For each territory she has created a multicolored classified surface map representing the cost-weighted distances (30 minutes and longer walking ranges) for the known 1st and 2nd order settlements from the Geometric through Ottoman periods.

In Chapter II.4 Farinetti pulls together all of these disparate analyses of the landscape as viewed from a revised settlement chamber (or chora) approach, the German Landeskunde tradition, the Community area theory and the taskscape concept. Here she discusses the settlement patterns of ancient Boeotia from the perspective of the 1st order settlements, most of which were the location of a polis and settlement over as long period. The second order settlements, towns and larger villages, were occupied for shorter periods. Again these presentations come with ample maps, charts, and tables subdivided by chronological periods and themes. Appendix I, organized by the 14 sub-regions, contains summaries of the archaeological evidence on which her analyses are based. A CD-ROM contains two more appendices – one (II) with the geographical sub-regions of Boeotia and the other (III) is a list of units of archaeological evidence. The Bibliography is extensive and up-to-date.

Such an approach could and should be used for the other regions of the Aegean basin. Our Library has more GIS-based case studies from the Mediterranean basin as well as the methods of archaeological survey and the results for perusal.

Cordially,
David Rupp
Director
Posted by CIG-ICG at 11:34 AM