CIG and Its Members at the A.I.A. Meeting in Chicago 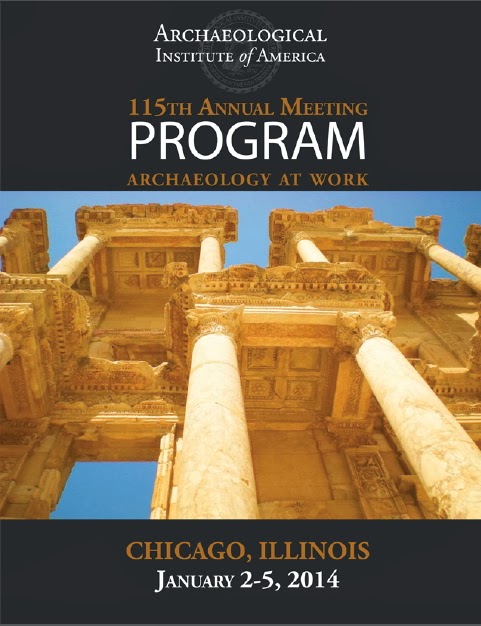 Every year, the first weekend in January, archaeologists and fellow travelers interested in the archaeological heritage of the Mediterranean world, Europe and the Middle East, from the Paleolithic period to the present, gather in a city somewhere in North America for a large four-day professional meeting. This meeting is organized by the Archaeological Institute of America (AIA) and one or more of their local societies. There are scholarly papers, colloquia, workshops, and poster sessions (as well as joint sessions with the American Philological Association which meets at the same time ) where topics of current interest are addressed and the results of the most recent fieldwork and research presented. Many of these contributions will turn eventually into some form of publication. This year’s AIA meeting was held last week in the cold, windy and snowy city of Chicago. The meeting is held in conjunction with the annual meeting of the American Philological Association which focuses on Greek and Latin philology and literature, ancient history and classical studies in general. Obviously, the interests of the two organizations and their members are congruent in many areas.

At the recent AIA meetings the Institute and its members were well represented as always. Below are listed where and by whom CIG made its presence known to our archaeological colleagues. The underlined individuals are CIG members. Papers with an * indicate the results of fieldwork carried out under the aegis of the Institute with a permit from the Hellenic Ministry of Culture and Sport. Dimitri Nakassis and Tristan Carter were particularly busy this year! Their planned fieldwork this coming summer should keep them in the “limelight” too at next year’s AIA meeting in New Orleans, I believe!

If I have inadvertently missed any active CIG member who gave a paper and/or participated in some fashion in the program please let me know immediately so that I can update the list!

Mycenaean Political Economy Session:
Dimitri Nakassis (University of Toronto) and Kevin Pluta (University of Texas – Austin): “Digital Imaging of the Linear B Tablets from the Palace of Nestor”.

Putting It Back Together: The Reconstruction and Interpretation of Ancient Surface Decoration Colloquium:
Anne Chapin (Brevard College) and Maria Shaw (University of Toronto): “Picking Up The Pieces – Virtually: Minoan Frescoes from the South House (Crete)”.