Save the Date!!! On Thursday, May 12th at 7:00 pm at the auditorium of the Danish Institute in Athens in the Plaka we will hold the Annual Open Meeting of the Institute . I will present an overview of the fieldwork and the activities of the Institute in 2010/11. In addition, we are honored to have Professor Robert Weir (Department of Languages, Literatures and Cultures, University of Windsor) give the Invited Lecture. His topic is, “Antiochos VIII and the Star of Destiny”. Our members, friends and the public are cordially invited to attend. There will be a reception afterwards. 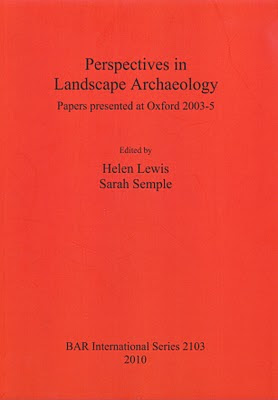 Book of the Blog
Archaeologists have been looking by various means at the earth’s surface since their earliest research and fieldwork. Primarily these approaches depicted the earth as a flat, undifferentiated surface where a variety of datasets were found and their specific distribution indicated by one type of symbol or the other. In the past 40 years, however, the growth of pedestrian archaeological survey as a data collection method, aided by aerial and satellite imagery and analyzed using GIS have supplanted to a greater extent such simplistic 2D concepts of space and of time. In tandem a more holistic research model developed to extract more a detailed and nuanced understanding of human activities in and impacts on the natural environment. This study, called landscape archaeology, looks at the ways which societies in the past constructed and used the physical environment. As a multidisciplinary approach it places heavy emphasis on the interactions of material culture, human intervention and modification of the landscape and the natural environment as a whole. One advantage is that the scale of investigation is very flexible, from micro to macro.

Between 2003 and 2005, 28 presentations were given at the Landscape Archaeology Seminar hosted at Oxford University’s Institute of Archaeology. Eight of these seminars, along with two by the editors Helen Lewis and Sarah Semple, are published together as Perspectives in Landscape Archaeology. Papers Presented at Oxford 2003-2005 (BAR International Series 2103, Oxford 2010). Although the focus of most of these contributions is on southwest England, Wales and Sweden from the Iron Age through the Medieval period, Ethiopia, Yemen, New Mexico (USA) and South Wales (Australia) are also represented. The papers deal with the meaning of landscape change from an individual site level to a regional perspective, how major changes in religious beliefs affected the landscape, or the interrelationships between cultural environmental changes. One can see how field work can be combined with historical and/or ethnographical sources for a broader understanding of causation and effect. “Memory work” and landscape archaeology have many positive interconnections.

Landscape archaeology has many proponents in the Aegean basin and in Cyprus. The Antikythera Survey Project and the Eastern Boeotia Archaeological Project, both conducted under the Institute’s aegis, are but two examples.