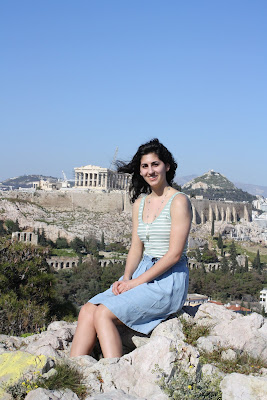 From January 9 – April 8, 2009, I spent three unforgettable months living in Athens as the Canadian Institute in Greece’s most recent intern from the University of Waterloo. At the time, I was months away from completing my BA in Classical Studies. Now, two years later, I have completed an MA in “Ancient Mediterranean Cultures” at the University of Waterloo and am currently working on an MSc at the University of Edinburgh entitled “The Hellenistic World”. How exciting that my travels have brought me back to this city, and that I am studying its art and sculpture with a fascination just as keen, though perhaps more practiced.

If I had to select a word that best describes my initial experience of Athens, it is this: overwhelming. I do mean this in a good way – there is never a shortage of things to do or see in this city, which makes it both exhilarating and exhausting. On any given night, a world-renowned expert is speaking of his or her own passions, and you may wind up rubbing elbows with individuals whose work you’ve only previously admired in books. Further still, there are countless resources and hours to be spent wandering through museums, libraries, and various sites. 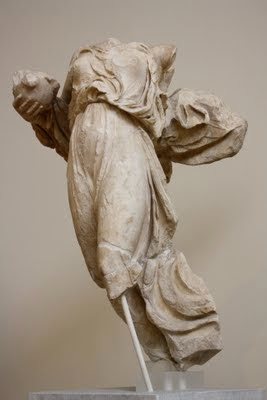 Most inspiring of all is the very personal feeling associated with encountering the art firsthand. It can be said that glimpsing the Parthenon for the first time is an exhilarating experience, but it was the hidden treasures that really left their mark on me as a young scholar. One trip to the National Museum at Athens in particular left me standing awestruck before an akroterion from the Temple of Asklepios at Epidauros. Two years later, my thesis on this very piece of sculpture is what brings me back to Athens for a three-week research visit.

I’m so grateful for the warm reception at CIG upon my return this month. The opportunity to live here two years ago played a critical role in my decision to continue with graduate studies, and helped me to forge relationships that make this trip not only personally rewarding, but also academically fulfilling. As I continue to build friendships with members of the CIG as well as the British and American schools at Athens, I am encouraged in my own academic endeavors and hope to someday contribute my own work to a community whose love of antiquity is, just as the city who produced it, overwhelming.

Victoria Vlasic
Posted by CIG-ICG at 11:03 AM

Email ThisBlogThis!Share to TwitterShare to FacebookShare to Pinterest
Labels: interns