Publication in Honour of Mac Wallace and Memory Work

In late June, 2009 the Institute organized a two day colloquium in memory of Malcolm B. “Mac” Wallace, a long-time, staunch supporter of the Institute and a well-known scholar in Greece. The focus of the colloquium was on his interests in Athenian history and in Euboea. Mac was one of the founders of the Southern Euboea Exploration Project conducted under the auspices of the Institute. Eighteen scholars gave papers, sixteen of which will appear in May in, Euboea and Athens: Proceedings of a Colloquium in Memory of Malcolm B. Wallace. Athens, 26-27 June 2009, edited by D. W. Rupp and J. E. Tomlinson. (Publications of the Canadian Institute in Greece, No. 6). Jonathan has just finished the page proofs for the authors’ scrutiny. This wide-ranging volume is a most fitting tribute to this intelligent and generous man, given in great respect by his peers, colleagues and students. 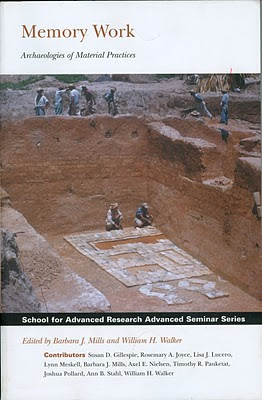 Book of the Blog
Often artefacts recovered from various archaeological contexts are viewed simply as isolated objects or as mundane examples of a particular class/category of tools, vessels, etc. While comprehending them as components of a particular assemblage, such as a burial, ritual deposit, workshop or dwelling is better, more and broader associations are possible and desirable. Specifically, when they are seen as part of the material culture of a specific group of people at a given point in space and time. The investigation of material culture as a whole “…focus[es] on the interaction of humans and materials, within different social contexts or interrelationships” or “the materiality of social life” (p. 3).

A growing number of archaeologists, anthropologists, sociologists and historians have turned their attention to the ways that material culture engages in the transmission of memory and how we can use such knowledge to interpret actions and processes of past societies. Barbara J. Mills and William H. Walker have assembled in Memory Work. Archaeologies of Material Practices (School for Advanced Research Advanced Seminar Series, Santa Fe, 2008) nine contributions (ranging from Britain to Africa, and the North, Central and South Americas) along with their insightful Introduction and Lynn Meskell’s perceptive closing overview on “memory work”. These case studies building on earlier research “…seek to understand how memory work is related to objects, features, and deposits that are the basis for archaeological interpretations” (p. 4). The diachronic nature of “…archaeological studies of materiality contribute to understanding how memory becomes historicized through linked activities that engage materials” (p. 22).

This interdisciplinary approach can be employed with benefit in classical studies too. For example, Julia L. Shear (American School of Classical Studies at Athens) is investigating the long history of the famous Tyrannicides sculptural group in the Agora of Athens from the perspective of social memory. Other researchers would gain important insights from a careful scrutiny of this important volume.