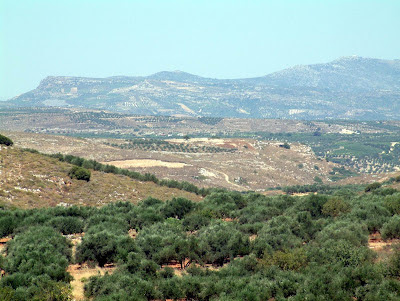 The coming Wednesday, the 15th is the Institute’s first lecture in its 2012 Winter/Spring Lecture Program. Matthew Buell (American School of Classical Studies/SUNY Buffalo), one of the key researchers associated with the Galatas Survey Project will present the results of this intensive survey. The fieldwork in the Central Pediada of south/central Crete was conducted between 2004 and 2006 under the co-direction of Vance Watrous (SUNY Buffalo) and Georgos Rethemiotakis (Herakleion Archaeological Museum). The investigations in the hinterland of the Minoan palace at Galatas are the focus of the lecture entitled, “Survey in the Heart of the Central Pediada: The Galatas Survey Project 2004-2006”. The evolving settlement patterns and the resource exploitation strategies over the millennia will be revealed to all!

Book of the Blog
The Institute and its Library has had many loyal and generous supporters over the years. One such individual, the late Professor Daniel J. Geagan (Department of Classics, McMaster University), was a constant benefactor of both. Dan died just over three years ago this month, after years of ill-health. The volume that he had been working on for most of his scholarly career has just been published with the dedicated efforts of Professor John S. Traill (Department of Classics, University of Toronto), the assistance of Dan’s wife, Helen, and contributions by others. Inscriptions: The Dedicatory Monuments. The Athenian Agora XVIII (Princeton: American School of Classical Studies at Athens, 2011) is a tribute to Dan’s meticulous scholarship and his tenacity. It includes the inscriptions discovered during the directorships of T.L. Shear Sr. and H.A. Thompson (1931-1968) of the Agora excavations. In other words, from I 1 through I 7047. This is the final of five volumes encompassing these inscriptions: Agora XV and XVII in 1974, XIX in 1991 and XVI in 1997.

The contents of Agora XVIII and the format of presentation are what one expects for epigraphical publications and Agora blue volumes. As the title indicates, the monuments included in it commemorate events or victories (Section II), honor individuals with statues or other representations (Section III), or belong to divinities either as votive offerings or as possessions (Section IV). Archaic and 5th century B.C. monuments are treated separately in Section I. Possible dedicatory monuments (“ambiguous fragments”) are presented in Section V, along with some fragments from funerary monuments as an addendum to Agora XVII. The inscriptions range in date from the end of the 6th century B.C. to the earlier 5th century A.D. with most falling in the period from the 4th century B.C. to the 2nd century A.D. The breadth and the detail of Dan’s study are most impressive.

Geagan’s volume proudly joins the Agora blues in our library, along with the Corinth reds and the other standard color series that are the indicia of the final publications of the other “big digs” conducted by the major foreign archaeological schools and institutes in Greece. In the last two decades archaeological research projects have become more focused in their goals and the length of their fieldwork much shorter in duration. These developments, combined with the demand for faster publication, have worked to change the characteristics and formats of archaeological publications. A research library’s holdings reflect the cultural milieu in which they are amassed. There is an inevitable time lag in the change, however, due to the persistence of long-lived research traditions and publication preferences. Nevertheless, the evolving digital technologies are fast re-shaping libraries.

Cordially,
David Rupp
Director
Posted by CIG-ICG at 11:18 AM