Classical Athenian Magic, the Origins of the Agora Excavations and Cyber-Archaeology

This coming Wednesday, the last day of this leap-year February, at 7:30 PM the members of our Athens Association of Friends of CIG will have the pleasure of hearing an illustrated lecture by Mark Walley, our Graduate Intern this winter and spring. Mark, with an undergraduate degree in Classical Studies from Bishop’s University, is now a M.A. candidate in the Department of Classics at Memorial University of Newfoundland. He is finishing his M.A. thesis on magic in 5th-Century BC Athens.

This lecture will explore the Classical Athenian concept of magic by focusing on the texts of authors during the Classical period. Writers such as Aristophanes, Euripides, and Plato each contribute important information regarding the topic of magic. Mark will analyze in particular how magic-related vocabulary is applied within its contexts in order to develop an accurate image of magic. This analysis will demonstrate not only Athenian sentiments regarding magic, but will also establish parameters through which magic was thought to take place. Given our contemporary general conception of what constitutes a magic act we will undoubted learn that this is not the same as it was in the 5th and 4th centuries BC. Another myth busted!


Lecture on the Origins of the American Excavations in the Athenian Agora
I wish to bring to the attention of our readers a lecture of interest that will take place on Tuesday, the 28th at 7 PM at the Historical Archive of the Hellenic Archaeological Service at Psaromilingou 22, near Odos Peiraeus, just on the edge of Kerameikos and Psyrri. Dr. Yiannis Hamilakis (School of Humanities, University of Southampton) will discuss what the various archival records reveal concerning the nature of the negotiations between 1924 and 1931 related to granting the American School of Classical Studies at Athens the permit to excavate the Athenian Agora and the public reaction in Greece to this. The lecture will be in Greek. 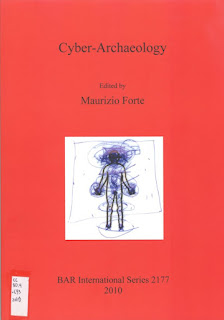 Book of the Blog
Digital archaeology, cultural heritage management and archaeological theory have cropped up a number of times in these mini-reviews. Today I have a volume that links these three together. Cyber-Archaeology (BAR International Series 2177, Oxford, 2010), edited by Maurizio Forte, is a mashup of 11 contributions from two different workshops organized in 2009 (Cyber-Archaeology at the “Theoretical Archaeology Group Conference” at Stanford) and 2010 (Virtual Collaborative Environments at the “Cultural Heritage at the Diversifying Participation. Digital Media and Learning Conference” at San Diego). There seems to be some dispute as to label this development as “cyber-archaeology”, “cyberarchaeology” or even “I-archaeology”. Further, is this simply “…a change in methodology, a change in paradigm, or a reflection of a broader change?” (p. 1) Erza B.W. Zubrow (SUNY Buffalo) wonders. His stimulating and provocative essay begins the volume. He postulates that the most useful aspects of the intellectual threads called cultural history, “scientific”/processual archaeology and post-processual/”interpretational”/”post-modern” archaeology will merge and be integrated into cyberarchaeology. This is because cyberarchaeology can bridge the gaps between them “…for it provides testable in the sense of adequacy material representations of either ‘interpretations’ or ‘scientific hypotheses or discoveries’”(p. 2). He believes that we will see in the course of the 21st century the impact of mobile smartphones and other mirco movable technologies. These will turn the present cyberarchaeology into I-archaeology.

Forte’s introduction to Cyber-Archaeology should give the big picture and explain how the individual contributions fit in. Unfortunately, its creative English and dense, jargonistic exposition and definitions make it something to be avoided. The papers cover a wide swathe. J.A. Barcelό explores the possibilities of harnessing artificial intelligence/expert systems to automate archaeological knowledge production. Using virtual reality collaborative environments a group of researchers are investigation the role of cosmic impact on the development of human history in Argentina. S. Kenederine describes the use of two immersive interactive installations for the interpretation of tangible and intangible aspects of a UNESCO World Heritage site in south India. J.T. Clark argues (correctly I believe) that we can’t “reconstruct” past culture history let alone something in the new domain of virtual archaeology. All we can do is offer possible “constructions” which are simply tentative models. The usability of geospatial technologies for the cross-cultural understanding of the oral histories of indigenous peoples is the focus of J. van der Elst’s paper. The issues of interactive 2D and 3D maps and navigation involved in constructing complex and “authentic” virtual cultural heritage environments along the lines of those seen in the best computer/play-station games are tackled by E. Champion. In this case a group of researchers have created a 3D virtual reconstruction of tomb chambers from the Western Han Dynasty in China. The use of virtual-cyber mind maps opens new horizons for simultaneous interpretation of the decorative programs on the vaults and walls. Another group used a set of stereo cameras to capture 3D video of a user in real-time in order to creates his/her avatar. This allow for remote real-time interaction with 3D archaeological models through a shared virtual environment. D. Kirsh experiments with the challenges of material engagement with digital versions of artifacts in virtual 3D environments to stimulate the processes of archaeological inquiry beyond perception. The virtual reconstruction (using open source technologies) of the 13th-century urban landscape of Bologna in Italy from multiple sources as a new method of interpretation and the visualization of historical data is presented by N. Lercari.

Probably the most relevant to the majority of the blog’s readership is the contribution by Thomas E. Levy (University of California, San Diego) and his co-researchers at an Iron Age site in Jordan. They use an amazing cyberarchaeology field recording system that feeds directly into a cyberinfrastructure delivered over the Mediterranean Archaeology Network (MedArchNet) and a Google Earth platform. They call it “On-Site Digital Archaeology 3.0” (OSDA 3.0). What are now relatively commonplace data collection methodologies (differential GPS, Total Stations, vertical and oblique imagery from a low-level balloon or kite supported platform) were merged with with new ones such as GigaPan high resolution panoramic views and terrestrial LiDAR scanning of the architectural remains and of the stratification. This avalanche of data is geo-referenced and stored in ArcGIS databases. They also use 3D artifact scanning in the field as well as in the laboratory. Using digitized pottery profile drawings and 3D scans the have created a Pottery Infomatics Queryable Database (PIQD) with a fully queryable spatial environment. Finally, to assist in the digestion and comprehension of these truly massive databases they have developed high-resolution scalable visualization portals for a broad set of 2D and 3D formats. This Visual Analytics Cyber-Colloboratory in the form of a tiled wall with 72 30” screens is called HIPerSpace. They also created in a pentagon-shaped space a 3D 360º total immersive Virtual Reality environment called StarCAVE with additional imagery on the floor. Not satisfied with this, NexCAVE employs a 3 to 21 panels (in 1 to 7 columns), 3D visualization display using synchronized 3D HDTVs. When used with polarized stereoscopic glasses and the associated software it is possible for a viewer to visualize massive datasets in high-resolution 3D with well-saturated color and quick speed of reaction as she moves her head. Just reading and pondering this article is worth the price of admission, which at the Institute is free!