Director Gets the Flouri, One Year in the Blogosphere, and Is Archaeological Theory Really Dead?

On Wednesday evening a brave and hardy group came for our annual Canadian film night and the CIG pita cutting ceremony. They were amply rewarded for their tenaciousness! Even though the Director’s piece produced the coveted flouri (and the gouri!), the pita was to die for, as they say! The movie, The Trotsky was hilarious, clever and very well-acted!!! For those who missed it, if you ever have a chance to see it, don’t hesitate! It pokes fun at many sacred cows: past and present, youth and adults, high school life, radicalism and conservatism and, especially, Canadian culture as seen through the lens of west Montreal reality.

Friday, the 20th of January passed without a single comment, let alone congratulations, from the blogosphere that our blog had been up and running for a year! Since January 20th, 2011 we’ve posted 62 (including last week’s) blogs with a range of bloggers providing the content and imagery. At the next party you can impress those standing by the bar with the following fascinating facts from our first year. Over all we’ve had 7,925 pageviews. Last month’s traffic was 1,028 pageviews. The most popular five blogs of all time (so far, at least) were as follows:

Most of the traffic to our blog comes from our Facebook group, followed by the CIG/ICG website and various Google searches. We are accessed by PCs mostly and fewer Macs, using Internet Explorer, Foxfire and Chrome in that order.

The political map of Canada that we used was THE most popular search term by far (although the searchers might not have been looking for us primarily)!! The Book of the Blog spotlighted 31 books in our Library related to our areas of specialization and donations by Canadian scholars. Much to my disappointment, I must say, we have had only 8 comments posted!!! );-[

Your suggestions for improvement and for topics that could be covered in the future are most welcome! 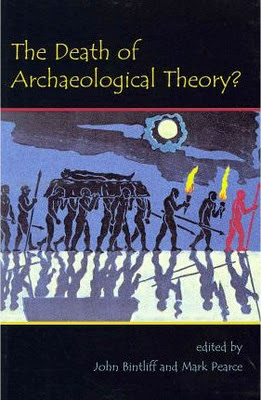 Book of the Blog
The phrase “archaeological theory” or simply “theory” has been mentioned frequently in the previous 31 mini-reviews that I have written over the past year. To a certain portion of our readership I am sure that this concept is dismissed immediately for a variety of reasons. Is it, in fact, necessary? Is it but a decorative embellishment to the real business of archaeology, the crafting of a plausible, well-supported culture-history narrative from archaeological data? Is it an end itself, separate from the praxis of fieldwork and analysis? Or is it a dead phenomenon from the past that was always changing with no apparent reason, like women’s fashion? Depending on the educational path that led you to the archaeology, art and/or history of the Aegean basin you either had or did not have formal inculcation in archaeological theory. Few North American graduate programs in Classics/Classical Archaeology or ancient Art History included any form of theory as an essential component of instruction. In the UK, with its departments of Archaeology, mostly separate from those of Classics, this would not have been the case. For a holder of an North American advanced degree, theory was then something you acquired on your own (especially if you had anthropological proclivities) or not at all.

For a number of our European colleagues, however, the state of “Archaeological Theory” is a contentious and dissatisfying topic that needs immediate addressing. This frustration resulted in a provocative and well-attended session at the Twelfth Annual Meeting of the European Association of Archaeologists held in Krakow in 2006. The organizers, John Bintliff and Mark Pearce, have just published, as the editors, many of the papers that were given and a few invited papers to provide a broader perspective. This thin volume, The Death of Archaeological Theory? (Oxford/Oakville: Oxbow Books, 2011) is, I must say, an archaeological bodice ripper! I couldn’t put it down! The six papers and an Introduction succinctly, in a mostly very accessible style, put the whole spectrum of archaeological theory in plain view. They ruminate on what is and what isn’t archaeological theory; the history of its development, especially in the past 50 years; the differences in thinking among North American, English, French and Eastern European archaeologists and self-proclaimed theorists; what is the present landscape looks and where it might go in the future.

After a series of “fads” since the early 1960s that lasted more or less 20-25 years, often related to T.S. Kuhn’s “paradigm shifts”, there does not appear at present a clearly dominant theoretical paradigm in archaeology with its attendant gurus. Each of the major ones, that is culture history, processualism and post-processualism all have their advocates today as does ecological-(neo)Darwinism. Essentially, each “generation” lives within and reacts to its social, economic, political and intellectual traditions. Thus, theory does not die it merely changes direction with the passage of time. The rough consensus of the authors is that most practitioners of archaeology combine theories and methods taken from all past and current traditions of the discipline to find what best fits the particular project or problem they are working on. Bintliff has argued before for such a “Wittgensteinian toolbox methodology” to probe the complexities of the past using material culture residues. They agree that an “Eclectic Archaeological Theory” is a viable, reflexive and nuanced alternative to the dogmatism of following a single theory of an “Ideopraxist”, to the exclusion of everything else. A given archaeological data set should be subjected to complementary analyses they argue to see which approach works better at elucidating understanding and meaning. Following Braudel’s model of history a number of archaeologists have embraced the Annaliste approach of French historians for the reason of holistic inclusiveness.

If archaeological theory was never your bag and the mention of competing theories makes you look for a copy of Archaeological Theory for Dummies then this compact volume is for you. Most likely you do have a personal conception of the theory or theories that underlie your archaeological research. There should be neither archaeology without theory nor theory without archaeology.