The Colloquium in Memory of Frederick Elliot Winter was a Resounding Success!


Just a week ago the two-day CIG Colloquium entitled, “Meditations on the Diversity of the Built Environment in the Aegean Basin and Beyond” took place at the Italian Archaeological School in Athens. A large and diverse crowd attended from the foreign schools and institutes as well as many Greek colleagues from the Ministry of Culture and from Greek universities. As we learned from various speakers Professor Frederick Elliot Winter had a broad range of interests in Greek architecture spanning from the Geometric through the Hellenistic periods. Rune Frederiksen, the Director of the Danish Institute at Athens, carefully analyzed in his Keynote Address how Winter's pioneering approach fifty years ago to the careful, in person study of Greek fortification systems and association of this evidence with developments in military strategy has set the agenda for present research. Both established scholars and graduate students gave papers. The level of the research, analysis and interpretation was exceptionally high.

Frederick Winter the person and, especially, the father and husband was brought alive to the audience by his daughter Mary. Her warm, and often humorous reminiscences, supported by ample family photographs, heightened our awareness of what he accomplished under much different circumstances than today. A number of the speakers who knew him in various capacities shared their insights into his big personality, wide ranging interests and loyal collegiality. The family's interest in the past has not lapsed, as his grandson Peter Burch is starting a doctorate in Anglo-Saxon archaeology and history at the University of Manchester. Peter was at the Colloquium and thought that many of the approaches used to study Greek architecture could be applied to his period as well.

The scholars who gave papers had ample opportunities at the breaks, over lunch, at the reception at the Swedish Institute, and at the concluding dinner to confer with their colleagues working on similar material. The interventions by the other attendees added richness to the discussions. Visits to each other's sites were arranged and references were exchanged. The papers will be published in the Institute's monograph series within the next two years. Ideas for our next Colloquium in 2014 or 2015 have already started to be discussed!

Without the hard work over the past year of Jonathan Tomlinson, and the assistance of our York University summer intern Laura Beaton, this productive Colloquium would not have taken place. The generosity of the Canadian Embassy and its Ambassador, Robert Peck, of Matti and Nicholas Egon and of Matthew Maher is gratefully acknowledged and much appreciated.

Those who did not attend missed a good one!!!

Is the CIG Colloquium on Your Dance Card?


Next Friday afternoon, the 22nd, at the Auditorium of the Italian Archaeological Institute in Athens (Parthenonos 14-16, Koukaki), will start our Colloquium in memory of Professor Emeritus Frederick Elliot Winter. Registration opens at 15:00. The program starts at 15:30 and continues through 20:15. The Keynote Address, by Dr. Rune Frederiksen (Director, Danish Institute at Athens), will assess the impact of Prof. Winter’s pioneering research on Greek fortification systems on current scholarship. Prof. Winter’s daughter and a grandson will be in attendance. Saturday’s program, on the 23rd, runs from 09:30 through 18:30.

Here’s an excellent opportunity to feast on a rich cuisine of architectural studies from around the Aegean basin. The topics span the Late Bronze Age through the Roman Imperial period. Included are palaces, monumental and not so monumental tombs, settlements and the planning of them, houses, temples and, of course, fortifications! Prof. Winter’s B/W negative research archive will also be featured. The program has a high “Canadian Content”! We hope to see you there!!! 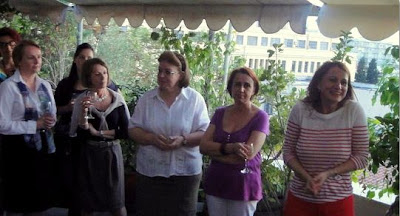 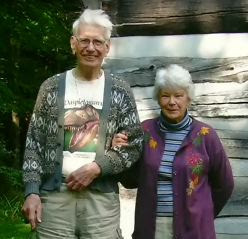 Cordially,
David Rupp
Director
Posted by CIG-ICG at 10:51 AM No comments:


When I arrived at the Canadian Institute in Greece I was asked to write a small profile for the website, which was to include my aspirations for my internship. Nearly five months later I can certainly say that I have accomplished far more than expected!

My internship has primarily been focused on updating, cataloging, and evaluating the Institute’s offprint collection. My duties also included preparing for post-lecture receptions. Fellow intern Kyle Campbell and I created variations on the standard reception fare at CIG which included different sausages with curry sauce, combinations of hard and soft cheeses, and creative twists to the usual egg salad and tuna sandwiches. The success of our experiments lies in the positive feedback for the change as well as the quick consumption of the products.

I was able to finish writing my M.A. thesis on magic in Athens during the Classical period. The library at CIG provided me with a quiet setting in which to write. I also had access to the libraries at both the British School at Athens and the American School of Classical Studies at Athens. Both libraries contain impressive collections and many items which have helped further my study. I was also able to take Modern Greek lessons through the Athens Center. I am far from fluent, but the lessons are certainly a valuable asset to living, working, and traveling in Greece. Over time I hope that my working knowledge of Modern Greek only increases. I also had the privilege of delivering a lecture for The Athens Association of Friends of CIG on the 29th of February. The lecture was essentially an overview of my thesis, outlining the methodology of creating parameters in which magic can take place and discussing examples. The lecture went well and was even attended by people in other countries via live streaming.

The academic/social aspect to Athens is incredible. I have met many people and have made some good friends here, many of whom are scholars who focus on a wide variety of interesting aspects of antiquity and medieval Greece. This same collection of people is right at home throwing darts at the Red Lion or attending the many lectures offered by the archaeological schools. It makes for a good balance of work and play. By the end of my internship I will have attended twenty-five lectures (not including those at CIG). One of the highlights of my time in Athens was meeting Dr. David Jordan. For those who are unfamiliar with his work, Dr. Jordan is a world expert on curse tablets, magic, and a former director of CIG. Soon after our initial meeting he invited me out to lunch! Over delicious food and wine at his favourite taverna, we discussed the past and current research being conducted on Greek magic. What a treat!

I have made multiple visits to the many museums and archaeological sites in Athens. Often, especially during winter, there would be few people if anybody visiting the places at the same time. My excursions to archaeological sites did not end in Athens; I have been able to take day trips to Aegina (with the American School), Thebes, Delphi, Lavrion, Eleusis, Sounion, and Larissa. On one occasion Jonathan Tomlinson took two mutual friends and I on a wonderful daytrip to Mycenae, Tiryns, and Nafplion. On another occasion I was able to go on a week-long road trip around the Peloponnesus with friends I had made over the course of my internship. It was fantastic! It is difficult to choose a favourite site, but some of the many places we visited included the Diolkos and Hexamilion Wall, Nemea, Franchthi Cave, Sparta, Mystras, Nestor’s Palace, Messene, and Olympia. Many of the places we visited were places I had not been to before. As always it is exciting to see new archaeological sites, and I think it is very important to visit a site in order to gain a better understanding of the site’s role and function in history and its cultural significance. I have heard people refer to my time here in Greece as an once-in-a-lifetime experience. For the most part I agree. My internship has introduced me to the finer details of the Canadian Institute in Greece, gave me the opportunity to pursue my academic interests in ways not possible in Canada, and all while making some fantastic friendships in a unique setting. In a sense though this has not been a once-in-a-lifetime experience because I will be back.

Mark Walley
Memorial University of Newfoundland
Posted by CIG-ICG at 10:00 AM No comments: