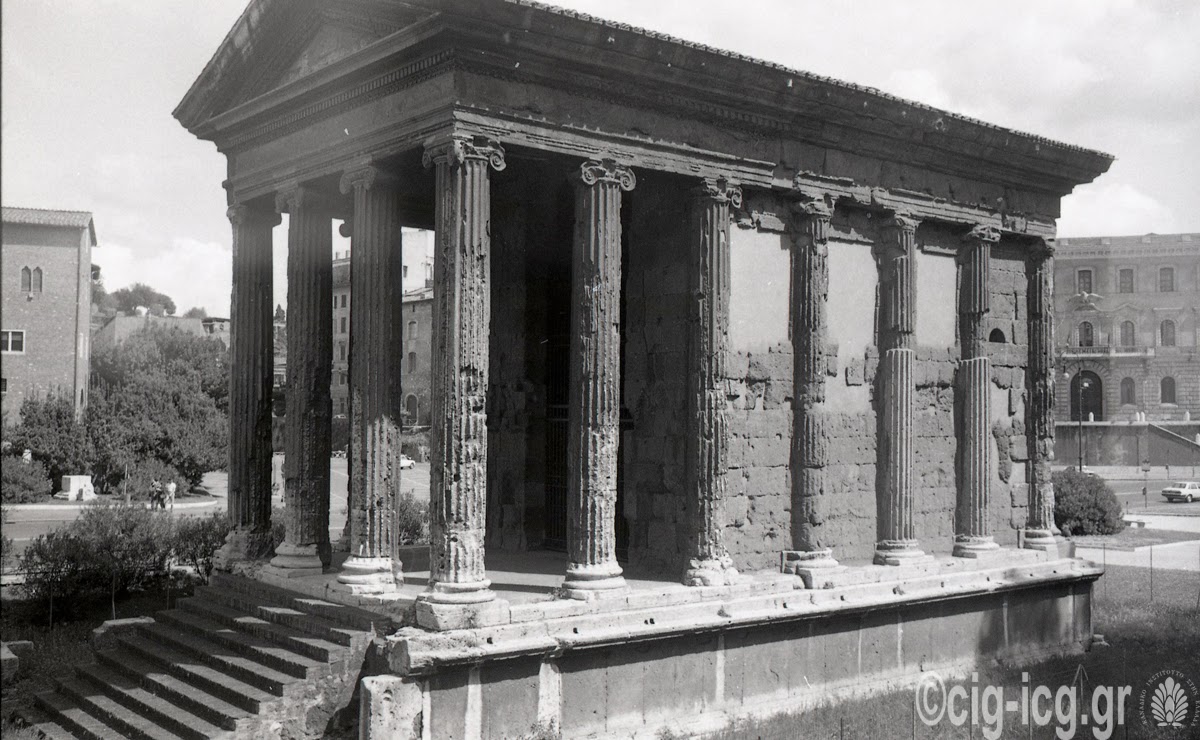 Rectangular Ionic temple in the Forum Boarium in Rome. (Professor Fred Winter, 1988)
Posted by Unknown at 12:00 PM No comments:

Eleon in eastern Boiotia: the 2014 fieldseason


Last Thursday, Jonathan and Gerry Schaus accompanied me to visit the Institute’s excavation project at ancient Eleon in eastern Boiotia. Last year our visit took place early in the field season so that the important discoveries were yet to come to light. This year, not only were we able to see the architectural finds of 2013 but also substantial new discoveries. As usual our expert guides were the project co-directors Brendan Burke (University of Victoria) and Bryan Burns (Wellesley College).

The acropolis is hive of activity with the large crew excavating now in three large sectors. The aim this year is to open up the Northwest and the Southeast Sectors in order to gain a better understanding of the layout of the LH IIIC and the earlier LH IIIB structures below them. In the Northwest Sector a large complex of rooms is coming to light. It is still not clear whether there was one building or two separate buildings. The burnt mud bricks from the final fiery destruction in LH IIIC Middle are impressive. The undisturbed MH cist grave was discovered in this sector in 2013 when they dug a sondage to test the depth of the archaeological deposits.

The Southwest Sector has substantial architectural remains from part of a LH IIIB structure. What is mystifying is the fact that the Ottoman period (15-16th century AD) roof tiles and pottery as well as the votive material from the Late Archaic/Classical period have no associated architectural remains to go with them. When one digs down 20-30 cm from the present surface, there is the top of the LH IIIC Middle layers.

The Southeast Sector is where a major effort is being made to understand the construction sequence of the ramp and the gate discovered in the previous season as well as to determine what was on the inside of the gate. One has the impression that there are large stones everywhere they dig in this area. Are these in situ from the Mycenaean period wall or reused when the ramp and the gate were constructed? The large blocks revealed in 2013 that form the threshold of the wide gate are worthy of a visit to the site. The massive North Tower that was partially uncovered in 2012 formed the southeastern side of the ramp. It now seems to have two phases. The exact configuration and date of the construction of the walls behind the northeastern side of the ramp is a work in progress. The same can be said of the area inside the wall by the gate. Can they see the patterns in the walls that will explain the organization and uses of the spaces here before the season ends in three weeks???

We were able to visit one of the project’s apothekes below the site in Arma. Here the cleaned sherds are laid out by excavation locus. Joins are sought, the pottery is “read”, vessels are mended and the significant sherds and restored vessels are drawn. Their archaeological illustrator is Tina Ross, one of my former students from Brock University.

The excavation at Eleon is providing us with insights into what a secondary settlement in Boiotia looked like in the Late Bronze Age, both while there was a palace at nearby Thebes and after its destruction. The imitation of Mycenaean cyclopean masonry by the use of Lesbian-style masonry in the construction of the wall and the ramp in the 5th century BC is a fascinating visual referral to the site’s “heroic past”. The probability of cult activity somewhere in this area, as the votive offerings suggest, is an intriguing problem given that so far no architectural remains can be associated with a contemporary shrine or a sanctuary. Was there a cult for a female deity guarding the gate and its bastions?

Ah, archaeological research! There are always more new questions and few clear answers to the old questions when one digs. This discipline is not for someone who seeks fixed, neat answers.

Kalo Kalokairi!
David Rupp
Director
Posted by CIG-ICG at 11:28 AM No comments: 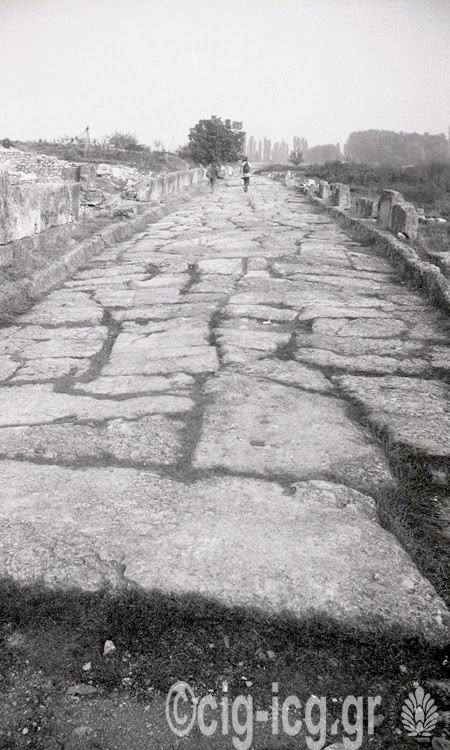 View along the paved main street of the Roman city at Dion. (Professor Fred Winter)
Posted by Unknown at 12:00 PM No comments:

WARP: Up and Running; A “New” Site in Athens


On Tuesday, Jonathan and I, accompanied by Gerry Schaus and Metaxia Tsipopoulou, ventured into the heart of the Argolid to visit the Institute’s newest fieldwork project, the Western Argolid Regional Project (or WARP). This joint effort of Dimitri Nakassis (University of Toronto), Scott Gallimore (Wilfrid Laurier University) and Sarah James (University of Colorado at Boulder) has just started its first of three field seasons. After a slow start last week they are systematically walking the fields in the third of the research zone that they will cover this season. The research zone is in the upper portion of the Inachos river valley to the northwest of Argos.

Numbering almost 30 individuals, with students from each of the three universities as well as other researchers, they are staying on the Gulf of Argos in Myloi, to the south of Argos. The senior researchers have ample experience surveying in the eastern Peloponnesos and in Cyprus. Thus, they are using the latest technologies for pedestrian survey such as satellite imagery, digital cameras and GPS to record their findings in the field and then to import these data sets in the afternoon into a GIS platform for storage, organization, analysis and display. In the “old days” to get results of the high quality that we saw would have taken many days, if not weeks, of focused effort by many individuals to achieve a preliminary version of this.

Although we were not able to see what they had collected so far, their descriptions indicate that the artifact scatters, while not continuous, are nevertheless frequent and interesting. With four weeks to go they expect to achieve both their coverage goals for this initial field season and to identify important new archaeological remains. We’ll find out more in August when they send us their “guest blog”. Kala evremata paidia!!!

A “new” site is now open in Athens
When it comes to archaeological sites in Athens, we often assume that all of them have been discovered by now and that we can go and visit them (within normal opening hours, of course) when we want. Those who specialize in Athenian topography and monuments know, however, that this is not true. The location of many important places in the history of settlement in Athens are either not known for certain and/or have been destroyed at some point in the past. Much ink has been spilled on where such buildings and places were, such as the “Old Agora”.

One elusive major monument of later Athens was the Lykeion. This was the Sanctuary of Apollo Lykeios outside the defensive walls of the city along the Ilissos river where, in 335 BC, Aristotle set up his peripatetic school of philosophy. It was called the Lykeion after the sanctuary there, just as the Academy of Plato was referred to from its shrine to the hero Akademos. Although long thought to be in the District now called the Anaktora (after the “New Palace,” now the Presidential Megaron), the remains of a portion of it did not come to light until work was started on a location proposed for the Goulandris Museum of Contemporary Art in the triangle formed by the Army Officer’s Club/Sarogleio, the Conservatory/Odeion of Athens on Rigillis Street, and the Byzantine and Christian Museum. What was uncovered by 1996 was a large portion of a palestra of a gymnasion with rooms associated with athletic training and probably on the north side the Ephebeion with a library. Two small baths were added later in the 1st century AD. In the years since the excavation was completed a study was undertaken to cover and to protect the remains as well as to create a small landscaped park around them.

Last Thursday, one of the individuals responsible for this work, the architect Dimitris Koutsoyiannis, showed me and my wife around the site, which had just opened without fanfare the previous day. Not far from Vas. Sophias Avenue, the broad entrance is on Rigillis Street at the rear corner of the Army Officers’ Club. At present there is no sign to indicate that the site is open to the public without charge. The archaeological remains are set in a flat area surrounded by the lower bedrock slopes of Mt Lykavettos. When the adjacent Conservatory of Athens was built in the early 1970s archaeological remains were found but were thought unimportant at the time. The Ilissos river bed here is where Vas. Constantinou Avenue is now.

Each section of the site has bilingual plaques (Greek-English) with plans, drawings and reconstructions to aid in understanding what is in a particular area. The remains date to the later 4th century BC, and they are part of what must have been an expansive complex along the road that ran out of the Diochares Gate that led to the Mesogeia of Attika. It was used until the mid-3rd century AD. Somewhere under the modern buildings and streets was the sanctuary itself, the Mouseion, stoas, the open and covered running tracks associated with gymnasia, and the garden and grove where the philosophers and their students walked. This is where Aristotle and his successors created the first library as we know it. Scattered walls at a higher level are from a 19th-century military barracks and exercise ground that stood until the 1960s.

The site has been planted with a large variety of Mediterranean plants as well as grassy areas around the architectural remains. There are places to sit as well. One can go from here through either of two gates to the new gardens behind the Byzantine and Christian Museum. The outdoor café of the Museum is a perfect place to think about what the Lykeion once was in the ancient world, what it means to us today and the nature of knowledge. You may need two frappes to realize all of this!

We hope that Dimitris Koutsoyiannis will give a lecture this fall at the Institute on the process and issues for creating a suitable protective cover for archaeological remains.

Cordially,
David Rupp
Director
Posted by CIG-ICG at 11:20 AM No comments: 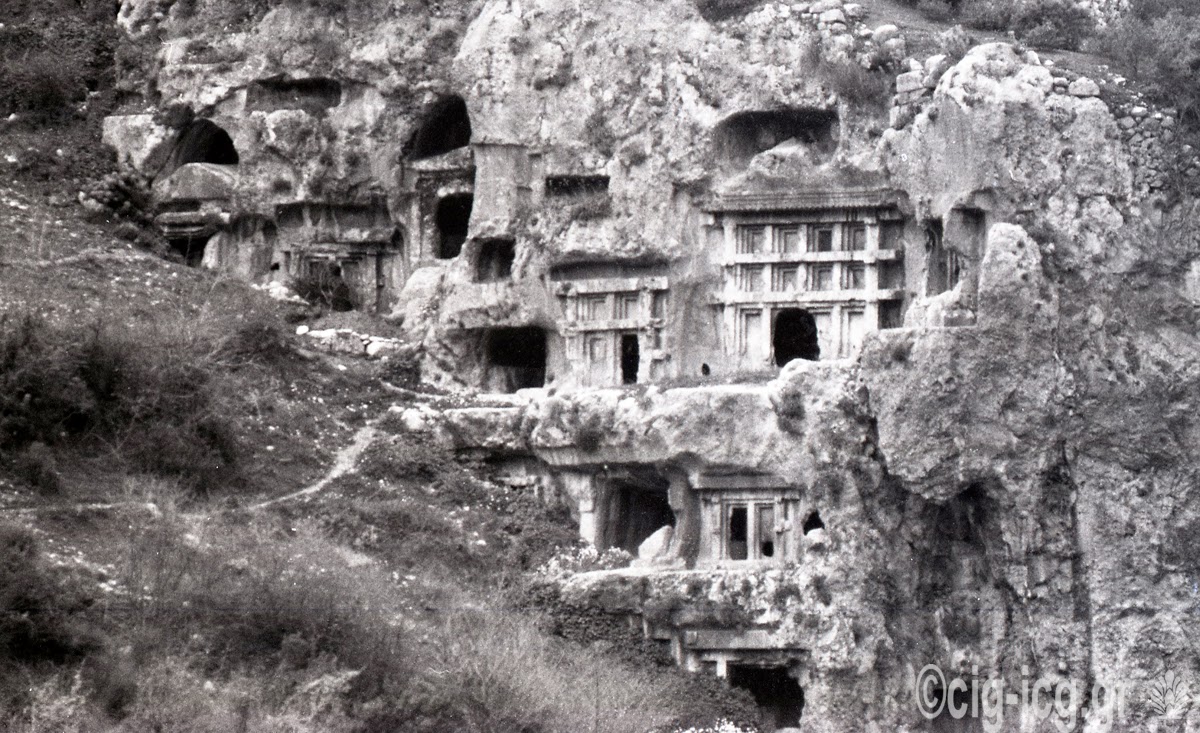 Detailed view of the tomb-façade at Telos. (Professor Fred Winter, 1988)
Posted by Unknown at 12:00 PM No comments: 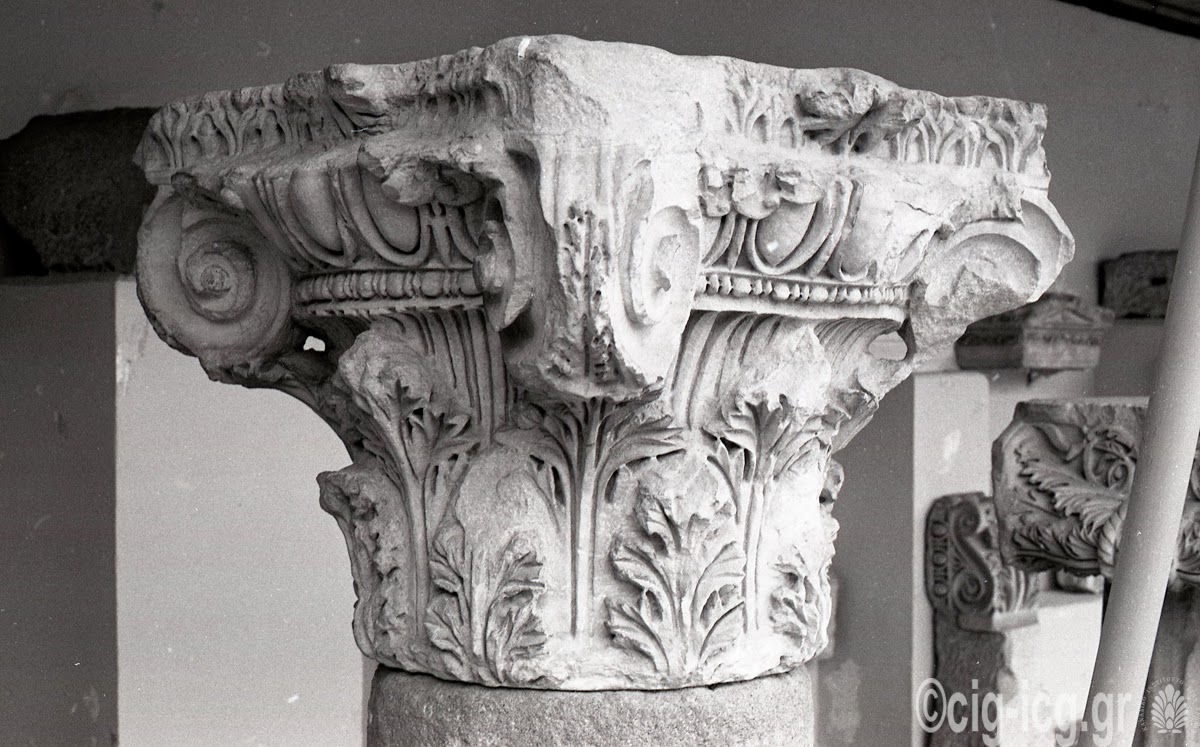