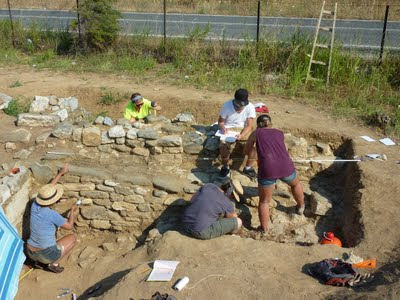 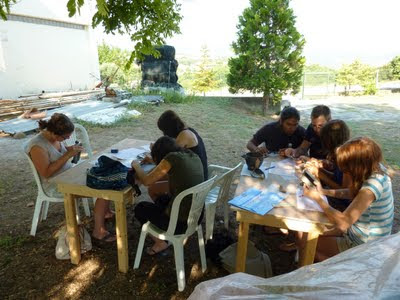 Jacques Perreault
Université de Montréal
Posted by CIG-ICG at 11:09 AM No comments:

Our excavation at ancient Eleon, in the village of Arma, in eastern Boeotia has just concluded its first season of digging and, by all accounts, it was a great success. Daily operations were led by myself and two North American colleagues, Dr Bryan Burns of Wellesley College and Dr Susan Lupack of University College, London, co-directors of the Eastern Boeotia Archaeological Project (EBAP). We are sincerely grateful to our Greek colleagues based at the Thebes Museum, Dr Vasilios Aravantinos, and Dr Yannis Fappas, who collaborated with us and facilitated this research. We are also very grateful for the administrative help and support from the Canadian Institute office in Athens, by Dr Jonathan Tomlinson and Dr David Rupp.

As we returned to Athens on June 29, we could still see lingering clouds of tear gas over parts of the downtown core, residual traces of the political and economic turmoil Greece is experiencing. It was a shocking return after what was for us a rather idyllic summer in the plains of eastern Boeotia, covering an important corridor between Thebes and the Euboean Gulf. This fertile area of Greece, with vineyards, olive groves, and fields of ripening wheat, has a multi-coloured landscape of brown, green and gold.

With a very focused and dedicated crew of about 12 (made up of undergraduates, graduate students, and staff from Canada, the US, the UK, and Australia), we started a new phase of research for EBAP by conducting trial excavations. Beginning in 2007 we had conducted a survey around Arma village and the areas of Tanagra and Eleona, so we did have some idea of what to expect. Our survey, however, also provided us with research questions: for example, why was there so much Mycenaean and earlier Bronze Age pottery on the surface of the acropolis site at Arma village, when the most prominent architectural feature – a massive wall of polygonal masonry – was obviously of Classical date? Following other scholars we identify this site with the ancient site of Eleon, which appears in Linear B tablets from Thebes and in the Catalogue of Ships in Book II of the Iliad. The important dates and the role of Eleon in eastern Boeotia will be further investigated in the coming years. For this blog, however, I’d like to highlight what was accomplished over four short weeks of dedicated work in June at the site. 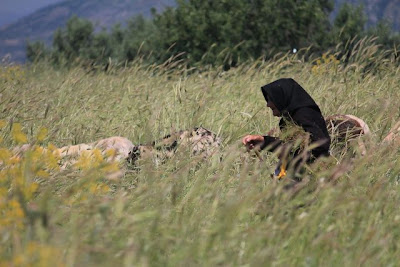 Breaking ground with the first trenches ever excavated at a site is a thrilling privilege, but conquering terra nova does present many challenges. After tackling the legal and administrative hurdles of acquiring the land for excavation from the local landowners (no easy task!), we then had to establish a workable grid over the site. We established a ten by ten grid which can be built on in the coming years. Then we began the process of clearing the very tall green grasses and thistles that blanketed the site over the wet cool winter and spring. The very first day we met a strong minded and swift-of-foot goat-herdess, 77 years young, who initially feared we’d be clearing the area of all edible greens, starving her animals! She soon saw that our aims (and resources) were not so grandiose, and by the end of the first week we all looked forward to our daily meeting with her and her 40 sheep and goats. Other, less regular visitors to the site included our closest neighbour, Giorgios the bee-keeper and his father and wife, and we often saw some old friends from our survey, Mr. Akrivakis and his son Kostas. 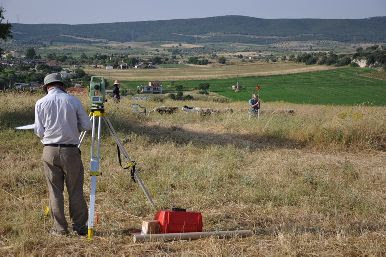 In the first week, using primarily gloves and one scythe we successfully cleared about 30 square meters of tall grass allowing us to begin laying out our trenches. Equipped with a Leica TPS400 Total Station we mapped out two 5 by 5 m trenches, one on the highest part of the citadel, and the other 20 meters to the south. These may not seem very large but we wanted our first season to focus on getting a stratigraphic sequence which requires depth of coverage rather than opening a broad area.

By the second week we had worked out a fairly efficient system of sharing duties - students and project directors alike (!) took turns picking, shovelling, and wheel barrowing. Careful record keeping and observation were of course a priority, as was photography and drawing various features. The material we found was primarily Mycenaean, and included decorated pottery, figurines, antlers and horns, and tools for cloth production. We organized the recording of our excavation around a locus and lot system, which maintains that a ‘locus’ is any stratigraphic deposit (trash lens, pit, wall, floor, etc.), while a ‘lot’ is a relatively arbitrary number which is used to map the actual excavation of any locus. 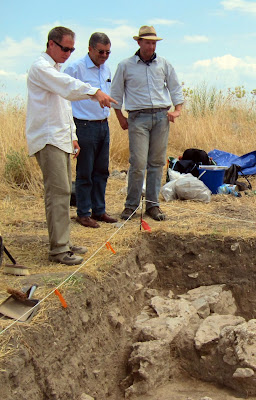 Most days would begin with our arrival in the field before 7 am and work would continue until about 2, with a snack break on site. We’d return home for lunch, a short rest period and then we’d begin washing and studying material until nearly sunset. Our material was washed, sorted, and studied back at our work space in Dilesi. Our living and work arrangements there are overseen by Mrs Ino Mamoni and her family at their beautiful home by the sea, and we gratefully acknowledge their hospitality and innumerable kindnesses. Dinners were a shared and pleasant experience, at a taverna on the Euboean gulf, facing the famous sites of Eretria and Lefkandi. Most of the crew was in bed by 10 pm each night. Some effort was made for card playing and after-dinner drinks in the first week, but I think we all soon realized that our time was better spent resting up for the next day’s discoveries. As a multi-partnered project, the first year of excavation at ancient Eleon was a great experience and we very much look forward to many more years of fruitful collaboration. We are proud to be the next generation of Canadian researchers in this part of Greece and hope that Boeotia continues to be an area of particular research interest for students and scholars from Canada.

Brendan Burke
University of Victoria
Posted by CIG-ICG at 12:04 PM No comments:

The value of sorting through ancient debris: the Kallithea 2011 study season

In late May of 2011, the Canadian Kallithea team arrived in Narthaki (our host village) to set up and prepare for an exciting study season. The weather was cool and quite wet as we prepared for four weeks of discovery while processing thousands of pottery sherds and other finds. We were generously treated by the Municipality of Pharsala under which Kallithea now resides, and the team once more enjoyed the various accommodations in Narthaki provided to us. The fourteen members of the team consisted of veterans to the project with the addition of three new students who were introduced to the history of the project and the site, as well as the rolling hills and dramatic landscape of Kastro Kallithea located in the Almiros Plain in Thessaly.

The primary focus of the season was to process the backlog of ceramics and other finds discovered during the Canadian and Greek excavations of several buildings in previous years, including: Building 10 (house), Building 1 (stoa), Building 5 (shrine), and Building 7 (probably associated with Building 5). The large quantities of pottery collected from these buildings kept us elbow deep in buckets of water while washing pottery, dreamily smiling from the nail polish fumes during labelling and cross-eyed looking for adjoining pottery sherds over the large sherd tables. In addition to the general processing and photography of finds, individual studies of particular artefact groupings (loomweights, unguentaria, the iconography/images on mouldmade bowls, coins, metal finds and stone objects) were undertaken by staff, students and volunteers. The study of the pottery from the urban survey at Kastro Kallithea (2004-2006, 2009), a PhD project by Laura Surtees, was completed.

The close examination of the ceramics has allowed us to significantly refine the chronology of occupation at Kastro Kallithea. Hellenistic ceramics are not easy to date, since many local Thessalian workshops produced large quantities of pottery necessitating a deep specialised knowledge of pottery of this area. Sophia Karapanou’s experience with the Hellenistic ceramics found in the houses at ancient Pharsalos was very useful, and also Colette Beestman-Kruijshaar, working on the ceramics of the nearby contemporary site of New Halos, helped us out by staying with us for several days. Both specialists were instrumental in aiding the secure dating and identification of the material. Based on the ceramic evidence and coins found at the site, we can conclude that the site dates from the mid 4th to the 1st century BCE. It appears that a spatial reorganization of the site occurred around the late 3rd/early 2nd century BCE; the agora of the city became abandoned, while habitation continued, or was re-established on the eastern slopes. This shift suggests a significant change in the political organization of the city-state around this date.

There is much interest amongst the local inhabitants regarding the archaeological investigations conducted at Kastro Kallithea and many of our numerous visitors were astonished by the quantity and quality of the tables and tables of finds laid out in the apotheke. At the invitation of the mayor of Pharsala, Aris Karaxalias, both project directors, Margriet Haagsma and Sophia Karapanou, gave a well-attended presentation (in Greek) at the cultural centre at Pharsala on the archaeological explorations conducted at Kastro Kallithea to help promote the history of the area and encourage local interest in the history. The 2011 study season has allowed us to gain a clearer picture of the use and occupation at Kastro Kallithea, and process the previously excavated finds in preparation for continued research in future years.

Margriet Haagsma and Laura Surtees
Posted by CIG-ICG at 10:55 AM 2 comments: 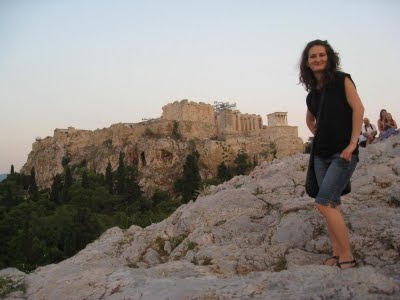 I think of my internship at the Canadian Institute in Greece as “Marketing meets Archaeology” as I am a Marketing student, about to complete my degree at York University. During my three months in Greece, I learned so much about the field of Archaeology, not only by working in the Institute, but also by attending lectures at various archaeological institutes in Athens, and visiting museums and archaeological sites around the country.

I am happy to inform you that the library at the Canadian Institute is ready and waiting for you to come and use it. In the three months at the institute I was able to successfully complete the inventory of entire collection. Seven rolls of tape later my job has been done here, I am about to leave Greece in a week. 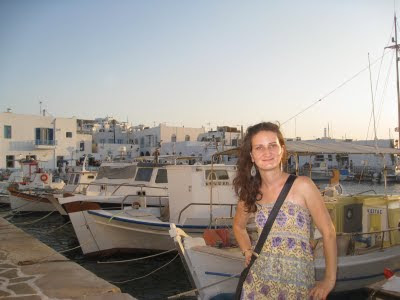 This is my first visit to Greece and I know it will not be the last! In these three months I handled thousands of books in the library at CIG, walked down the streets of Athens numerous times, had countless frappes and met many interesting people from all around the world. I also took a Modern Greek class, which proved to be extremely helpful when reading signs and street names.

I travelled around the country, visited interesting places such as Nafplio and Delphi, but my favourites are the Cycladic islands. I loved the relaxed pace and beautiful beaches of Paros and Santorini. One day when I return to Greece I would love to do an Island Hopping tour of the Aegean.

Until then I have my photos to remind me of the amazing three month experience here.