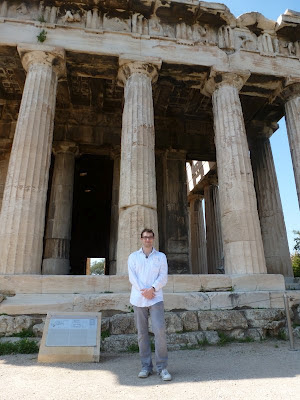 Wow, these past three months have blown by! I’ve met so many wonderful people and visited so many breathtaking places, yet it feels like I only arrived yesterday! I’ve had so many memorable experiences and so it’s hard simply to summarize them here!

Being a concurrent major in Biomedical Sciences and Classical Studies (Language Specialization), I came to Athens as an Intern for the University of Waterloo’s Classical Studies Department while also taking a course in Greek Epigraphy. As an intern, my jobs included cataloguing monographs, periodicals, and offprints for their respective catalogues. A focus was given on the offprints as the information in its catalogue needed updating and sorting. Some other jobs included preparing a list of duplicates for our book sale, hostel laundry and preparing for CIG Lectures and Friend’s Events. I love making food and also really appreciated the material that I learned during the lectures, so CIG Events were always something to really look forward to!

The Epigraphy course was also a very interesting experience. Technically, the course is being taught back in Waterloo as an on-campus course. However, with many inscriptions being just a walking distance away, Dr. Sheila Ager, my professor, gave me permission to take the course through correspondence with her and my classmates. How did I stay in contact? Not only through email, but Skype as well! The course runs from 14:30 – 17:30 on Wednesdays back in Canada, meaning 21:30 – 00:30 here in Athens and so I must say that communicating about Ancient Greek grammar at night and through Skype was certainly amusing! The students in Canada also had to pass me around while they took turns translating (as I was on a laptop) so they also had a few laughs (“OK, pass Kyle to me now!”)! I also had the rare opportunity of making a Squeeze of an Inscription (i.e. making an imprint of an inscription using special paper) thanks to Dr. Robert Pitt, Assistant Director of the British School at Athens, so I can certainly say that I got a lot out of taking the course while here! 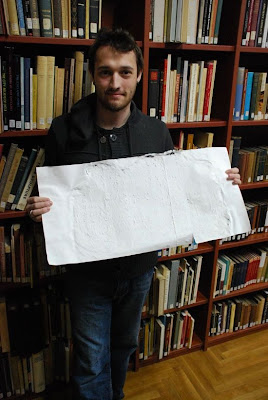 My main interests in Classical Studies lie in Political and Military History, so travelling to actually see many of the sites that I previously only could gaze at though a textbook was amazing! I managed to see Ancient Corinth, Acrocorinth, Ancient Messene, Mycenae, Ancient Tiryns, Nafplion, Delphi, Piraeus and of course numerous sites in Athens such as the Acropolis, the Athenian Agora, and the Kerameikos. Seeing these places really gave me a good sense of perspective and will certainly help me in learning more about historical ancient Greek events in the future.

Regarding living in Athens during their economic struggle, I can say that I was never all that worried. You just need to be aware of what is going on, when and where, and to avoid these places when need be. Generally, I felt very safe in the city and didn’t encounter any problems! The Athens News was an excellent source to follow and it is also in English, so I would periodically check the site.

Thanks to everyone in Athens for giving me such a wonderful experience – I am certainly going to return to Canada as a more mature and worldly person! My internship will be a time that I will not forget.

Kyle Campbell
Posted by CIG-ICG at 9:27 AM