An Experience to Remember...


Even after 193 days in Greece, it is a sight that still takes my breath away: the rocky ledges of the Athenian acropolis rising up from the concrete labyrinth that is modern Athens, topped with that crowning jewel of Classical Greek culture, the Parthenon. Such a meeting of old and new can be seen not only in the monumental stones of the Acropolis, but throughout the fascinating city of Athens. From the crumbling ruins of an old wall on a random street corner, to column drums reused as chairs, to the pottery sherds that crunch beneath your feet, this city has a charm that I don’t think will ever fade, and I am so grateful for having been given the opportunity to experience it. 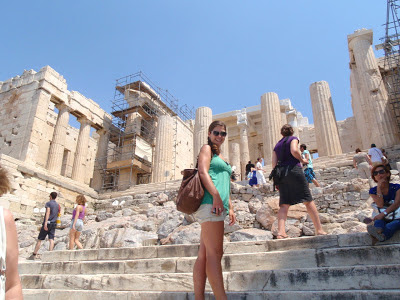 When I arrived in Greece six months ago, Christmas felt like a faraway deadline; a point in the distant future that marked the end of my Greek adventure, but with so much to do between June and December, I was sure that the holidays would never come! In June and July I was off to Crete where I had an amazing time digging up the remains of a Minoan town at the site of Gournia. After six weeks of digging in the dirt, the month of August flew by as I fell into the idyllic lull of summer life on the Greek island of Sikinos, explored as many ancient sites as I could cram into my five weeks of travel, and took trips to Italy and England to meet up with family.

As summer came to an end, so too did my nomadic lifestyle, and it was wonderful to be able to settle into a routine in Athens and make a home-away-from-home here at the Canadian Institute. Ever since I had learned about this internship opportunity through my university, I had dreamed of living, working, and studying abroad in Athens, so it was a bit surreal to begin living my dream in September. As I settled into life at CIG, I was introduced to the intern’s usual activities such as cataloguing library books, taking care of the hostel’s laundry, and, most importantly, preparing the sandwiches for Institute events and lectures, in addition to some new projects that the Institute had underway. The majority of these new ventures involved digitizing old archives and collections; insightful work which involved lots and lots of scanning. Needless to say, at this point I can pretty much scan a photo or document with my eyes closed! 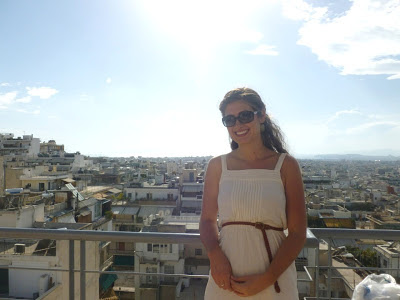 As a student in my last year of undergraduate study at Wilfrid Laurier University, I also used this opportunity to spend some time in the incredible library resources available through the foreign archaeological schools and institutes in Athens. I spent many an afternoon in the libraries of the American and British Schools, browsing the shelves of site reports or pouring over academic journals as I conducted research for two senior courses which I completed this fall. A variety of lectures hosted by the schools and institutes added to my scholarly experience here, and I have greatly enjoyed taking part in the lively foreign archaeological community so active in the city.

When not pursuing academic endeavours, this excited archaeology student walked (or more often, skipped gleefully) in the footsteps of the ancients, exploring ruins and studying artifacts at numerous archaeological sites and museums. From Delphi to Patras, Aegina to Corinth, it has been amazing to visit the places I have read so much about, with new friends who get just as excited about Mycenaean pottery and ancient stone cuttings as I do! So thanks, friends – I’m so glad that I found people who love old rocks too. 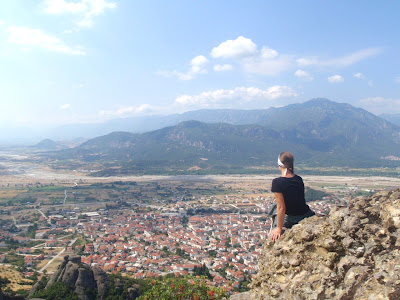 As I pack my bags this week, I can’t believe that the Christmas holidays, which felt like a lifetime away back in June, are already here. As I say a (temporary) goodbye to Greece and all of the amazing people I have met here, I would also like to say thank you, for making these 193 days some of the best ever! You can be sure that I will be back very soon, Apple Cinnamon Blondies in hand!

A special thanks to the Canadian Institute for having me this fall, and to Dr. Gerry Schaus and Wilfrid Laurier University for making this experience possible. Αντιο και Καλά Χριστούγεννα!

Rachel Dewan
Wilfrid Laurier University
Posted by CIG-ICG at 11:34 AM