Scholarship Galore and the Three Guest Bloggers of Christmas


For those readers who have not spent a month or more in Athens between early September and late June the richness and variety of the archaeological lectures, talks, seminars and events program is not apparent. With 17 foreign archaeological schools or institutes and their annual open meetings, the Gennadius Library, the University of Athens, the many museums (most with associations of friends), the Minoan and the Mycenaean Seminars, Greek research institutes, College Year in Athens and the Athens Centre there is seldom an evening without a lecture, an event or an opening. Generally, there are two and sometimes three or more to choose from. The topics covered are diverse in time, space and content. If this wealth is insufficient for a jaded scholarly palate, then these institutions frequently organize one-, two- or three-day local and international conferences, symposia or colloquia. There is one such larger program once a month on average. Who has time here for their own research and writing? 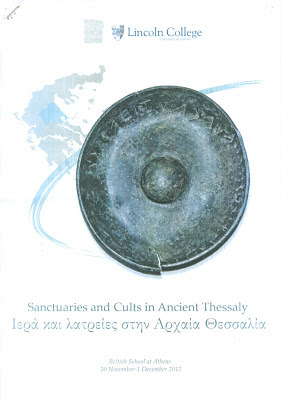 This fall in keeping with the pattern there were four conferences. At two of them members of the Institute were represented on the programs. The British School at Athens organized at the end of November a two-day conference entitled, “Sanctuaries and Cults in ancient Thessaly”. Professor Margriet Haagsma (University of Alberta) and Dr. Sofia Karapanou (15th EPKA) gave a paper entitled “Domestic and city-wide cults in Achaia Phthiotis, Thessaly”. This focused on material found at their ongoing excavations at Kastro Kallithea in Thessaly with comparisons to material found at the Netherlands Institute excavations at New Halos to the east. Our Alfoldi Fellow, Gino Canlas was an avid attendee as his doctoral dissertation will focus on one of the lesser deities in the Thessalian pantheon.

This past week the Danish Institute at Athens with other research institutions organized a large, multi-day international conference called “Fokus Fortifikation” which brought together researchers interested in ancient fortifications. Using the fortifications at Argilos in Macedonia as his starting point Kevin Ouellet, a. M.A. candidate at the Universite de Montreal, gave a paper entitled, “The city walls of the Andrian Colonies: tradition and regionalism in military architecture.” Our synergates at Argilos, Professor Jaques Perreault (Universite de Montreal) and Zissis Bonias (Greek Archaeological Service), were supporting co-authors. Kevin was the only M.A. candidate on the program and he earned high praise for his efforts!

The Three Guest Bloggers of Christmas
We have a holiday treat for the followers of this blog! For the next three Fridays a distinguished guest blogger will regale you with accounts of their time in Athens this fall. Professor Gerry Schaus (Wilfrid Lauier University), President of the Board of Directors of CIG has spent part of his sabbatical leave here these past two months. Next Friday he will share his thoughts on what he has been doing in the libraries of the city. The following Friday, Rachel Dewan, our undergraduate intern this fall from the Wilfrid Laurier University will provide glimpses into her wide ranging experiences, including four months before the scanner. And last but not least, Gino Canlas, our previously mentioned Alfoldi Fellow, will tell his about his extensive research activities since October.

Now you have something to look forward to each week over the holidays!