The Thessalian Goddess on Horseback and Archaeology in the News 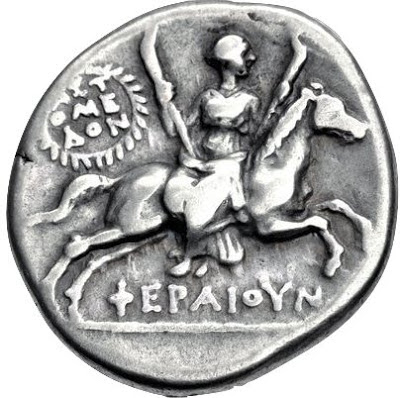 Our next Institute lecture is this coming Wednesday evening, the 27th, at 7:30 PM. We are very pleased to have Gino Canlas, our Alföldi-Rosenbaum Fellow this year speak on the subject of dissertation research. He is a doctoral student at the University of British Columbia. In his lecture, entitled “The Goddess on Horseback: the Spread of the Cult of the Thessalian Goddess Enodia”, he will explore the archaeological and epigraphical data for this unique regional deity who carried a torch. Originally restricted to eastern Thessaly, Enodia became one of the most important Thessalian deities in the 4th century BC and her cult spread throughout Thessaly and beyond. This lecture will revisit the previous scholarship on the cult and discuss the reasons for its spread by examining the evidence for the nature of the cult in and out of Thessaly. 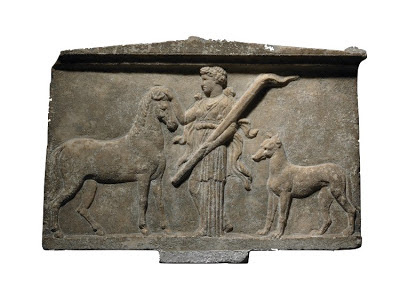 We will learn what Gino has uncovered concerning Enodia in the growing stack of journals and books that have engulfed him in the CIG library over the past five months!

Some effects of the "Greek Economic Crisis" on access to archaeological sites and museums
Archaeology in the Mediterranean basin frequently has a contentious relationship with construction activities and, especially, with large scale development projects. The long history of habitation, combined with the substantial architectural remains of Greek, and more so Roman and later, urbanism has created a landscape densely populated with archaeological remains. While many are known, many more archaeological sites await discovery. These antiquities are among the prominent drawing cards that the national tourist organizations use to lure visitors to their countries. The monumental public and religious architecture of an imperial Roman city is particularly impressive and photogenic.

For Greece, its long and rich past, as Prof. Dr. Yiannis Hamilakis (University of Southhampton) and others have argued, has been used repeatedly in its modern history to define its national identity and to support its status in the international community. The ruins of “Classical” Greece, where democracy was born and the people ruled, are presented as timeless exemplars of the many remarkable achievements that ancient Greek culture gave to western civilization. The extensive network of archaeological sites and museums that the Greek state has developed throughout the country over the past half century provides visitors and citizens alike with many potential opportunities to interact with this rich and diverse cultural heritage.

As I pointed out last year the economic crisis that has engulfed Greece since 2009 has had collateral damage to almost every aspect of life here, in particular services. Few ministries have been spared from reductions in their budgets and employees. The Ministry of Education, Religious Affairs, Culture and Sport through its General Secretariat of Culture is responsible for cultural heritage, in general, and archaeological sites and museums, in particular. Staff shortages have resulted in the temporary closing of many of the regional museums and of the smaller archaeological sites. Shorter opening hours are the norm for those that remain open. The National Museum in Athens and the Archaeological Museum in Thessaloniki do not have all of their galleries open on each day. The campaigns of the Ministry of Tourism to draw tourists here to invigorate the economy are set against the reduction of the access to the touted cultural heritage by another Ministry. A workable model for long-term sustainability is needed for Greece’s cultural heritage and the sectors of the economy dependent upon it. 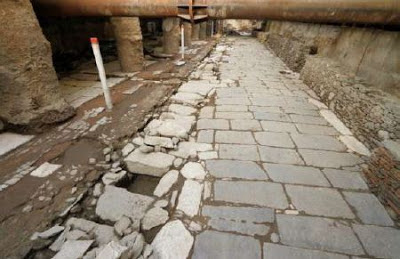 A major preservation conundrum in Thessaloniki
In Thessaloniki there is a dispute now over what to do with some spectacular architectural remains that have been found underneath the streets during the construction of the city’s Metro. This city has a long, vibrant history stretching from the Hellenistic period to the present. Under the Roman Empire and its Byzantine successor the city was a major center in southeastern Europe with important political, administrative and economic functions. As a result all of the features of Roman and Early Byzantine urbanism were present: orthogonal grid layout, agora, forum, odeion, imperial palace, hippodrome, theater, marble-paved portico streets with shops behind, triumphal arch, tetrapylon, rotunda, mosaic floors, Christian basilicas, etc. These are the type of ruins that tourists go to Turkey, Jordan, Tunisia, Libya, Algeria, Syria and Lebanon to see. The construction of the Metro station at Venizelos Street has revealed extensive, well-preserved architectural remains. Here, where the east/west running, marble-paved main thoroughfare of the city (decumanus) intersected with the main north/south street to the port, stood a monumental tetrapylon. Major public buildings stood along the street. Associated with this structure are shops dating to the 6th-9th centuries A.D. What should be done with these impressive and important remains? This is a classic collision of developmental needs, construction deadlines, cost and cultural heritage preservation. The Central Archaeological Council of Greece which makes recommendations to the Minister for decisions relating to heritage matters proposed that the remains from this stretch of the road be removed so the construction work can continue as planned. Their suggestion was that they would then be reconstructed on an ex-army camp outside of the city at some distance. This idea has enraged many residents and officials of Thessaloniki who believe that these important remains should be saved in situ, can be safe-guarded from the Metro and a cost-effective repositioning of the station can be found. With the support of the Board of Directors of the Kentro Byzantinon Erevnon of the Artistoleian University of Thessaloniki and Dr. Polyzeni Adam-Veleni, Director of the Thessaloniki Archaeological Museum , the Association of Greek Archaeologists have started a petition campaign to reverse the recommendation to bolster the other efforts in Thessaloniki. There is a facebook group, “ΝΑ ΣΩΣΟΥΜΕ ΤΟ ΙΣΤΟΡΙΚΟ ΚΕΝΤΡΙΚΟ ΣΤΑΥΡΟΔΡΟΜΙ ΤΗΣ ΘΕΣΣΑΛΟΝΙΚΗΣ” that is supporting this effort as well. It appears that almost 8,000 individuals have signed the petition so far. Check out this preservation conundrum and follow your conscience.